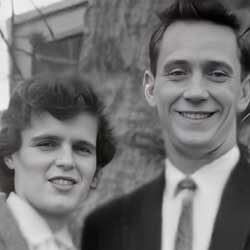 How to Download the Photoshop Beta and Preview Upcoming Features 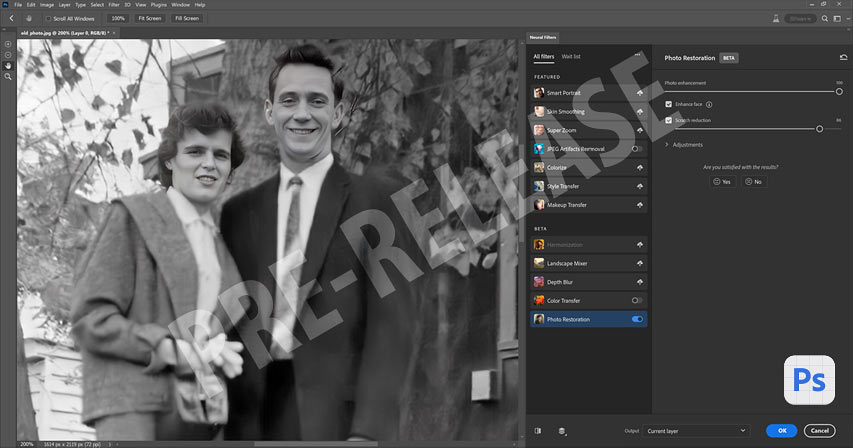 Want to try out upcoming Photoshop features, like the Photo Restoration Neural Filter, before the official release? This tutorial shows you how to download and install the latest Photoshop beta!

As a Creative Cloud subscriber, you have access not only to official Photoshop releases but also the beta versions. Downloading the latest Photoshop beta lets you preview upcoming features that Adobe’s Photoshop team is working on. This means you can try out features before they are officially released, and even help improve them by reporting bugs, submitting ideas and joining the Photoshop beta online community.

To download the latest Photoshop beta, you’ll need an active Creative Cloud subscription. Both the official Photoshop release and the beta version can be installed at the same time. 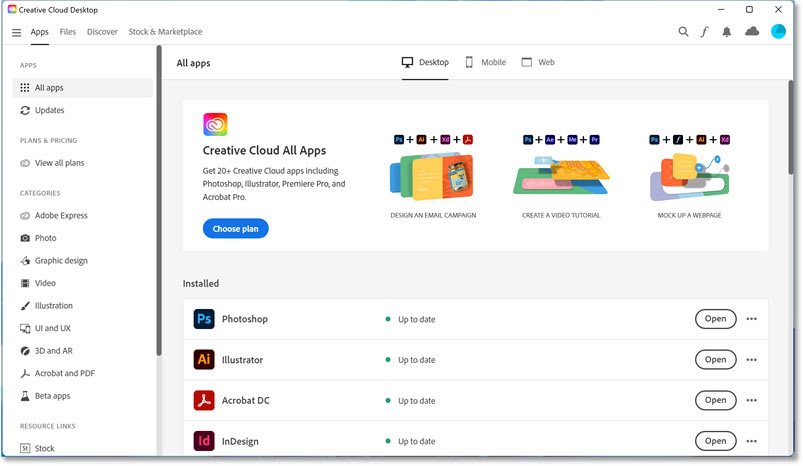 In the column along the left, click Beta apps. 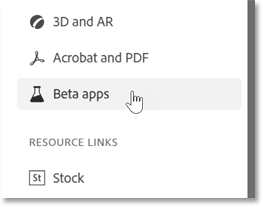 Look for the Photoshop (Beta) app and click the Install button. Depending on your Creative Cloud subscription, you may see beta versions of other Adobe apps as well. But we’ll stick with Photoshop.

Once downloaded and installed, the Photoshop beta will be listed under Installed beta apps. Click the Open button.

Note that you will not find the Photoshop beta listed with your official Photoshop release in the All apps category. Beta versions can only be opened from the Beta apps category.

Step 5: Confirm you are running the Photoshop beta

When the Photoshop beta opens, it looks just like the official Photoshop release.

Here it has opened to the Home Screen. 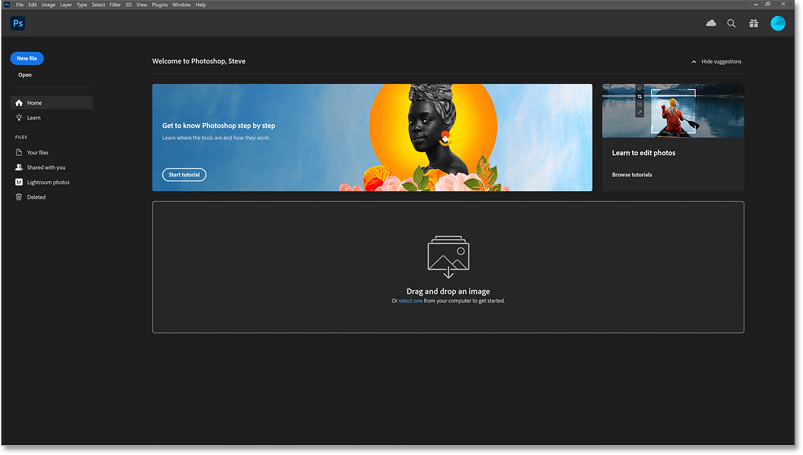 The Photoshop beta and the official release look nearly identical. 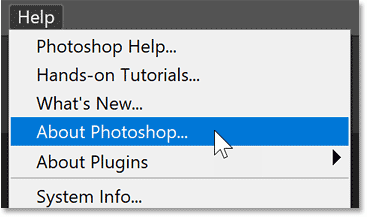 Opening the About Photoshop screen.

The About screen will display Adobe Photoshop (Beta). The version number shown here may be different when you download it. Click anywhere to close the screen.

The About screen confirms you are running the Photoshop beta.

So now that you’ve installed and opened the Photoshop beta, how do you know which upcoming features are available to try out? And where do you find them? All the information you need is in the Beta Feedback dialog box.

In the dialog box, the main Beta overview screen tells you how many beta features are currently available for review. At the time I’m writing this, there are two features (a Photo Restoration Neural Filter and Multi-Image Content-Aware Fill). You’ll also find links to report a bug, submit an idea, visit the Photoshop beta community, or get help. Clicking any of these links will open Adobe’s website in your browser. 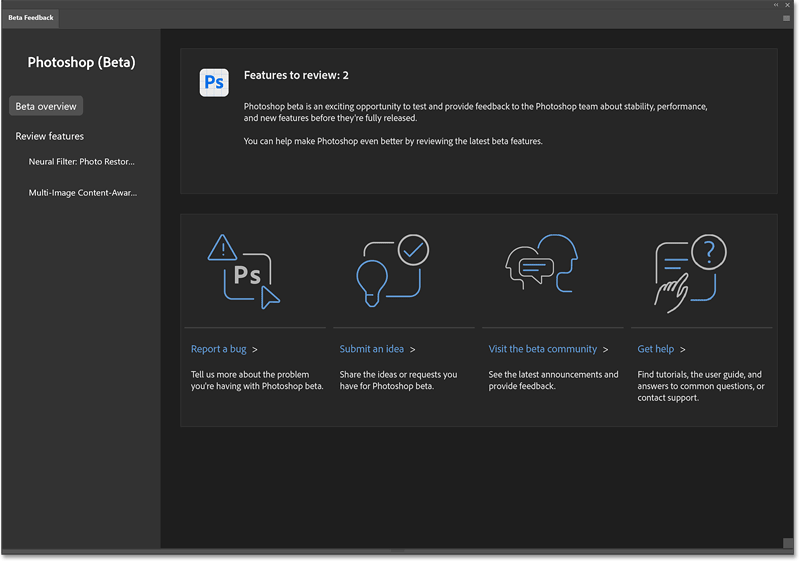 Learning more about a beta feature

To learn more about a specific beta feature, including where to find it, click on its name under Review features in the column along the left. 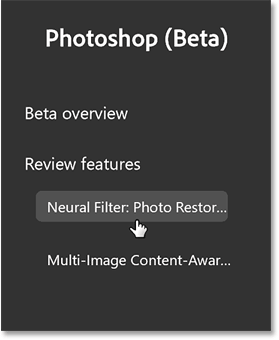 Here you'll find details about what the feature does (or at least, what it's supposed to do) and how to use it. 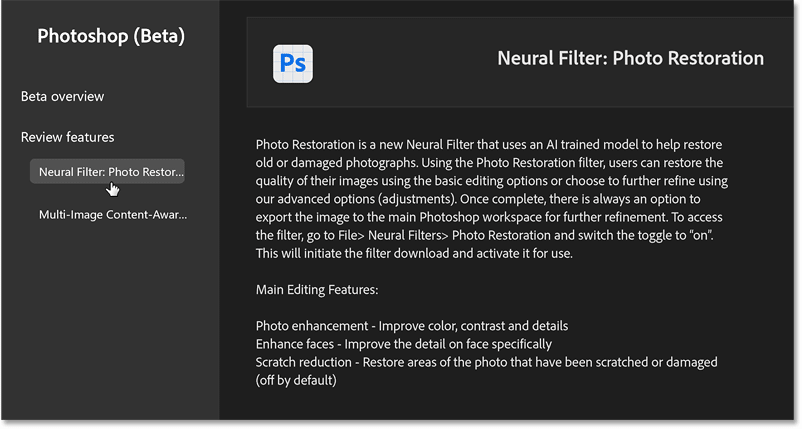 The Beta Feedback dialog box provides all the information you need to get started with a feature.

How to provide feedback on a beta feature

Once you’ve tried out a beta feature, be sure to let Adobe know what you think of it so far.

After trying the Photo Restoration Neural Filter (which I will cover in a separate tutorial), I think it’s very impressive but still needs work. 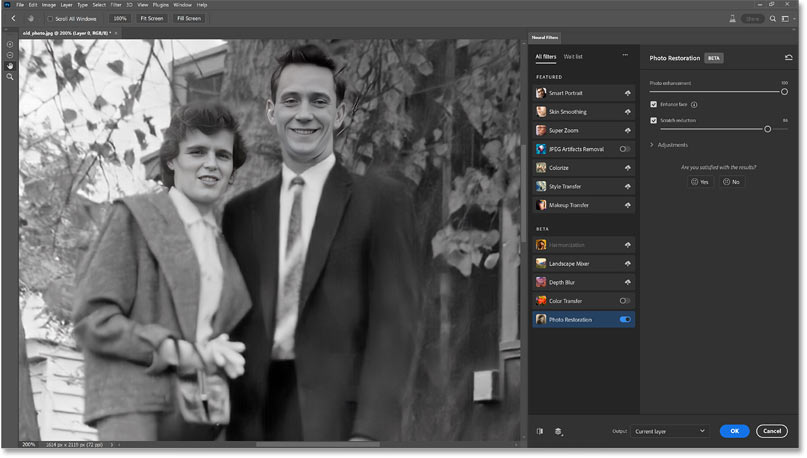 So in the panel along the right, under Are you satisfied with the results?, I’ll click No. 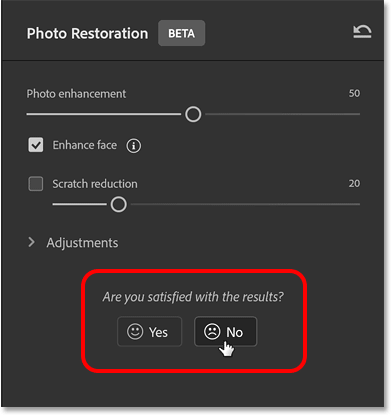 A dialog box opens where you can provide Adobe with more details. Click the Submit button to send them, or click Skip to cancel. 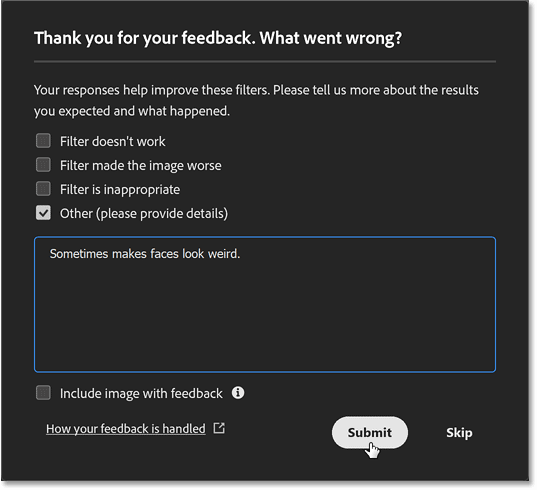 Sharing my opinion about the beta feature with Adobe.

And there we have it! That’s how to download and install the Photoshop beta release, preview upcoming features, provide feedback, and help shape the future of Photoshop!

Be sure to check out my tutorials on the Photoshop's latest official features, like the improved Object Selection Tool and the more powerful Select Subject command. And don't forget, all of my tutorials are now available to download as PDFs!