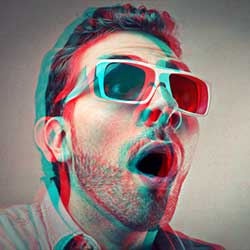 How to Create a Retro 3D Movie Effect in Photoshop

Put on your old red and blue 3D glasses and recreate the look of classic 3D movies from the 1950's with this quick and easy Photoshop effect. A step-by-step tutorial for Photoshop 2023 or earlier.

Long before modern 3D movies like "Avatar" and its sequel "The Way of Water", movie monsters in the 1950’s were leaping out from the screen in terrifying red and blue. And in this tutorial, I show you how easy it is to recreate that same red and blue (technically red and cyan) retro 3D movie effect with Photoshop.

Of course, since Photoshop works with flat 2D images, we're limited in what we can do. But we can at least make something that looks like it’s from an old 3D movie. And as we’ll see, this effect is so easy to create that once you know the steps, you can go from start to finish in 60 seconds or less.

Here’s an example of what the retro 3D effect will look like when we’re done. 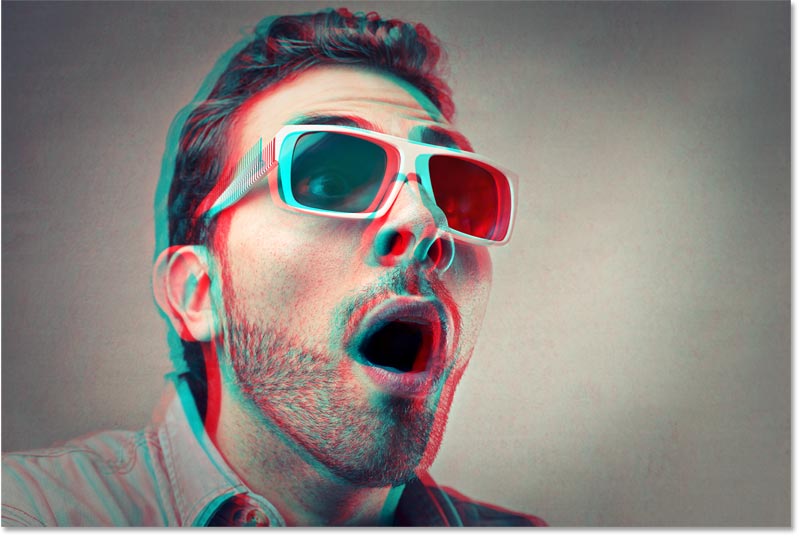 Along with the classic red and cyan colors, I’ll also show you how to create variations of the effect using other color combinations, like green and magenta. 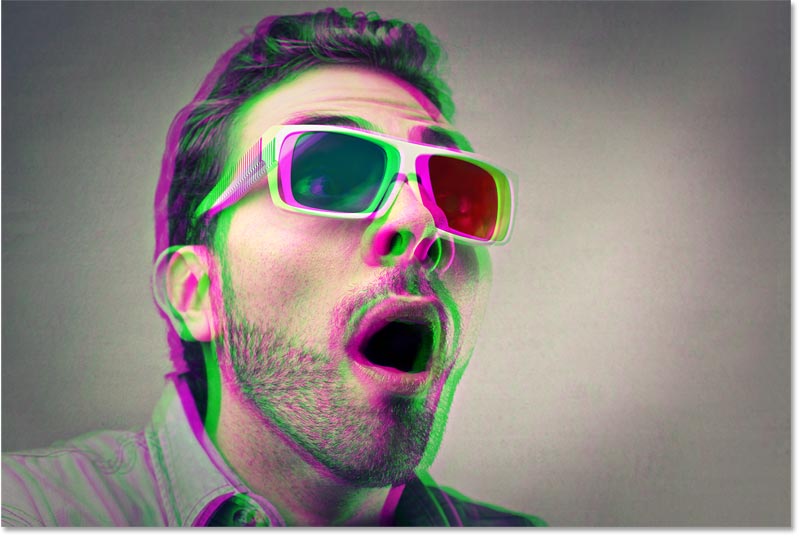 A variation of the 3D effect using different colors.

I’m using Photoshop 2023 but any recent version will work. You can get the latest Photoshop version here.

I’ll use this image from Adobe Stock, but you can also follow along with your own image. 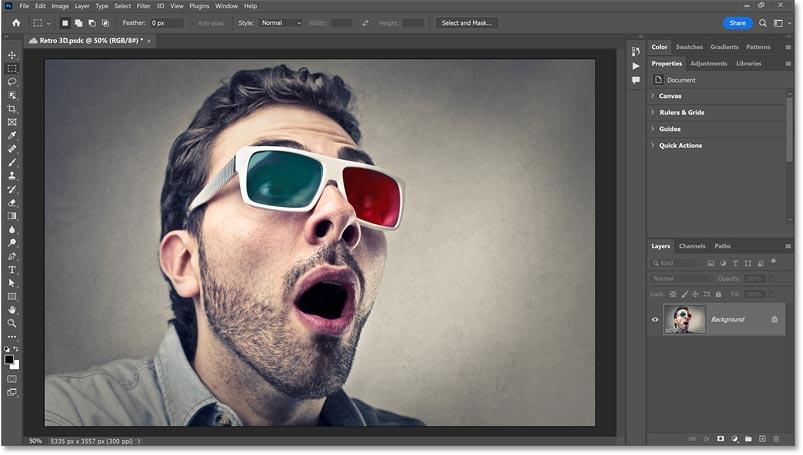 Step 1: Make a copy of the Background layer

In the Layers panel, the image appears on the Background layer: 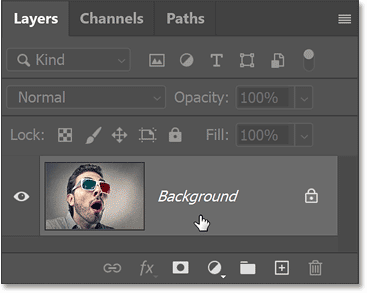 Related: Learn all the ways to get your images into Photoshop!

Make a copy of the Background layer by dragging it down onto the New Layer icon. 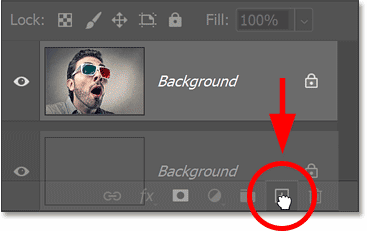 Making a copy of the Background layer.

Photoshop adds the copy above the original. 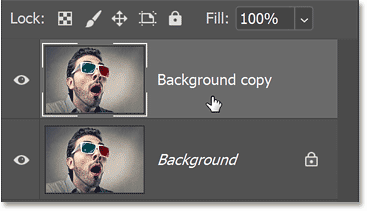 Double-click on the copy’s name to highlight it. 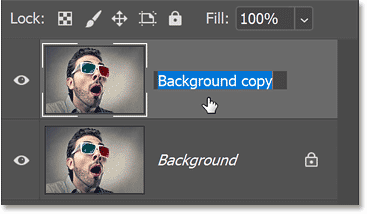 Double-clicking on the layer's name.

Then rename it "3D". Press Enter on a Windows PC, or Return on a Mac, to accept it. 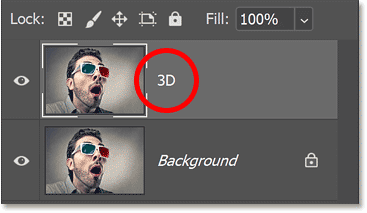 Still in the Layers panel, open Photoshop’s Blending Options, either by double-clicking on an empty gray area of the “3D” layer or by clicking the fx icon at the bottom of the Layers panel:

And choosing Blending Options from the top of the list. 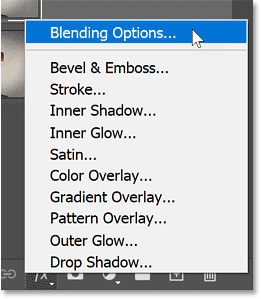 The Layer Style dialog box opens with the Blending Options in the middle column. 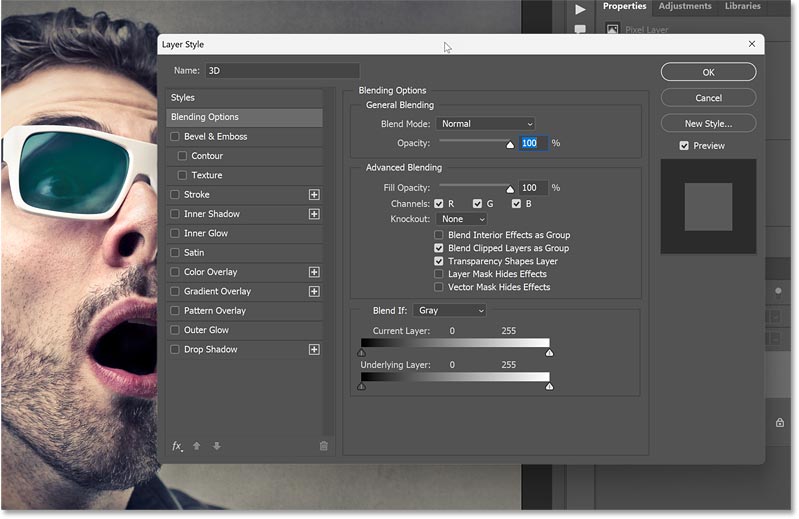 The Blending Options are found in the Layer Style dialog box.

Step 3: Turn off the Green and Blue color channels

In the Advanced Blending section, look for the R, G and B checkboxes next to the word Channels.

The R, G and B channel checkboxes.

R, G and B represent the Red, Green and Blue color channels that Photoshop mixes together to create all the colors in the image.

Turn off the Green and Blue channels by unchecking the G and B boxes, leaving only the Red channel (the R checkbox) turned on.

Turning off the Green and Blue color channels.

Then click OK to close the Layer Style dialog box. 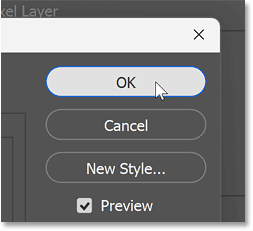 It won’t look like anything has happened to the image. But if you turn off the Background layer by clicking its visibility icon: 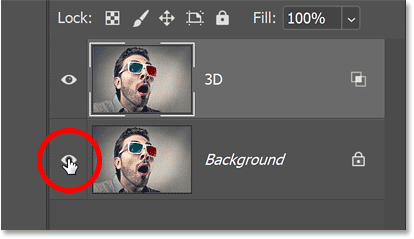 Turning off the Background layer.

You’ll see that the image on the "3D" layer now appears only in red. 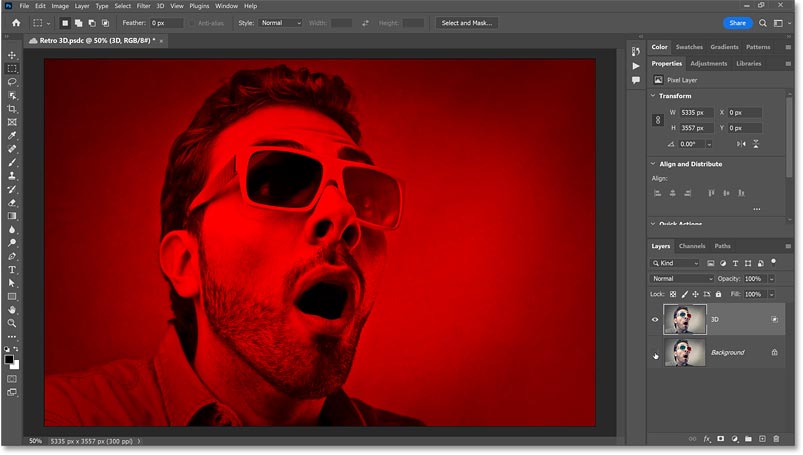 The image using only the Red color channel.

Turn the Background layer back on to return to the full color image. 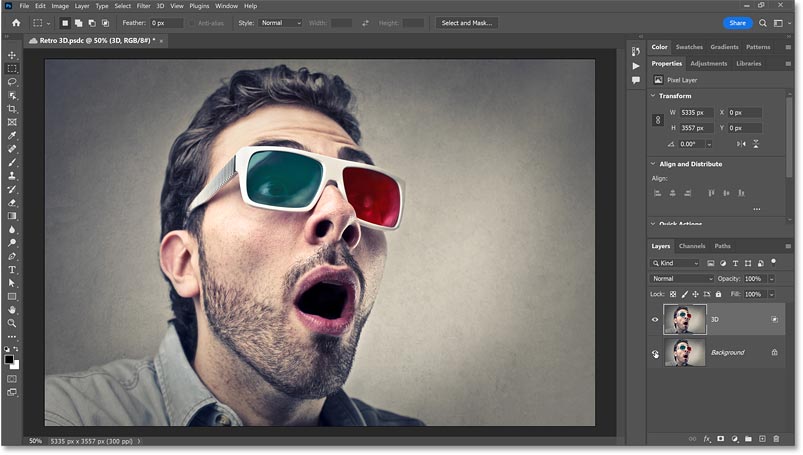 Back to the full color version.

To create the red and cyan 3D effect, all we need to do now is offset the two versions of the image.

In the Layers panel, make sure the "3D" layer is active. 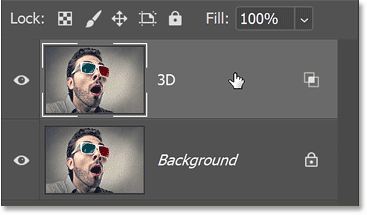 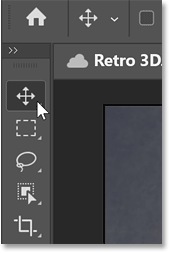 Step 5: Nudge the image to the left

Use the left arrow key on your keyboard to nudge the image on the “3D” layer to the left. Hold Shift while pressing the arrow key to move the image in 10 pixel increments.

The more you offset the two images, the thicker and more obvious the red and cyan outlines will appear. So continue nudging the image until you’re happy with the result.

Offsetting the image on the "3D" layer creates the red and cyan 3D effect.

Along with the classic red and cyan 3D colors, you can also choose other color combinations for variations on the effect.

In the Layers panel, reopen the Blending Options by double-clicking on an empty gray area of the “3D” layer. 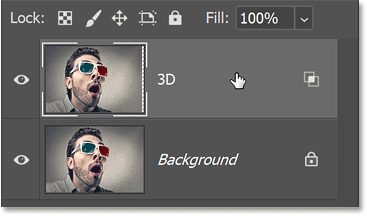 Double-clicking on the "3D" layer.

Then in the Layer Style dialog box, uncheck the R box to turn off the Red channel and check the G box to turn on only the Green channel.

Turning the Red channel off and the Green channel on.

This gives you a green and magenta effect (since magenta is the opposite of green).

A green and magenta variation of the 3D effect.

Or turn off the Green channel and turn on only the Blue channel:

Turning the Green channel off and the Blue channel on.

For a blue and yellow effect (yellow is the opposite of blue). To return to the classic red and cyan colors, simply uncheck both the Green and Blue channels and turn the Red channel back on. Then click OK to close the Layer Style dialog box. 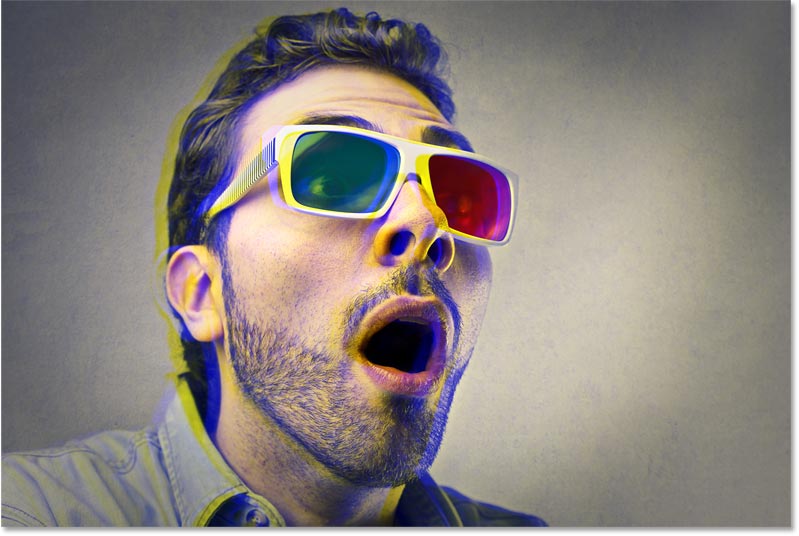 A blue and yellow variation.

And there we have it! That's how easy it is to recreate the look of retro 3D movies in Photoshop.

Don't forget, all of my Photoshop tutorials are now available to download as PDFs!