In this tutorial in our series on creating photo borders and frames in Photoshop, we'll learn how to quickly add canvas space and a drop shadow to an image to create a simple yet stylish border, and we'll learn a handy trick that makes adjusting the angle and distance of the shadow as easy as dragging your mouse!

I'll be using Photoshop CS6 here but this tutorial is fully compatible with any recent version of Photoshop including CC (Creative Cloud).

Here's the image I'll be working with (bride photo from Shutterstock): 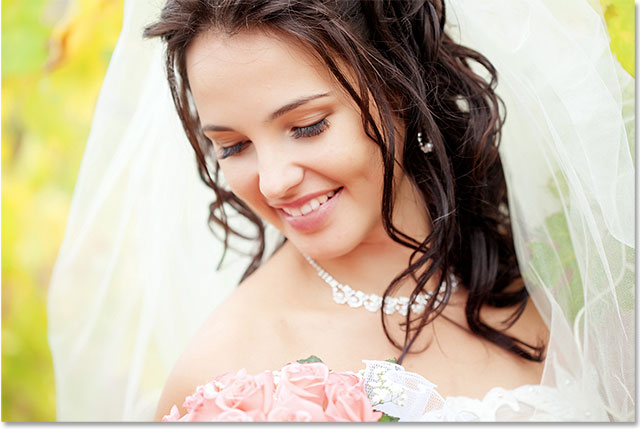 And here's what the drop shadow border will look like when we're done (note that the border around your photo will be pure white, but mine will appear as a very light shade of gray in the screenshots just so we can see it a little better in front of the white page): 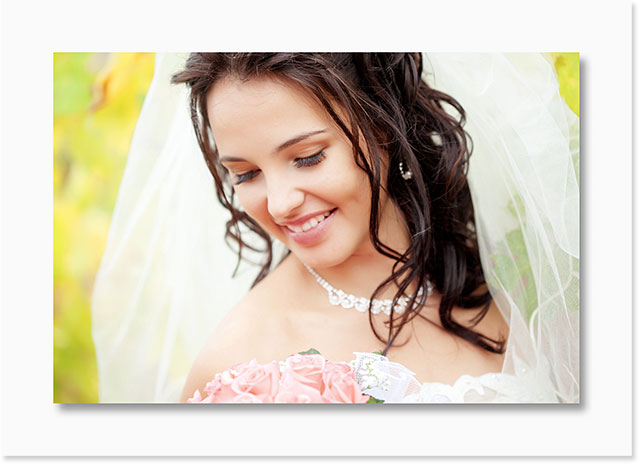 How To Create A Drop Shadow Photo Border

One way to duplicate the layer, and also name the new layer at the same time, is to go up to the Layer menu in the Menu Bar along the top of the screen and choose Duplicate Layer:

Photoshop duplicates the Background layer, names the new layer "photo" and places it above the original:

Next, we'll add some extra canvas space around the photo. Go up to the Image menu at the top of the screen and choose Canvas Size. Or, just press Ctrl+Alt+C (Win) / Command+Option+C (Mac) on your keyboard to quickly select the Canvas Size command with the shortcut:

This opens Photoshop's Canvas Size dialog box. First, make sure the Relative option directly below the Width and Height boxes is checked so the values we enter for the Width and Height will be added to our existing canvas. Select the center box in the Anchor grid so the extra space will be added equally around all four sides of the canvas. Then, set the Canvas extension color at the bottom to White so the extra space will be filled with white:

Enter the amount of canvas space you want to add around your photo into the Width and Height boxes using whichever measurement type is easier (usually Pixels or Inches). I'll enter 2 Inches for both the Width and Height. The values you need may be different depending on the size of your photo:

Enter the amount of extra canvas space you need into the Width and Height fields.

Click OK to close out of the Canvas Size dialog box. Photoshop adds the extra space, filled with white, around the image. If you find you've added too much or too little canvas, just press Ctrl+Z (Win) / Command+Z (Mac) on your keyboard to undo it, then go to Image > Canvas Size and try again with different Width and Height values:

The photo after adding white canvas space around it.

All that's left to do now is add our drop shadow! Click on the Layer Styles icon (the "fx") icon) at the bottom of the Layers panel:

This opens the Layer Style dialog box set to the Drop Shadow options in the middle column. The first thing we need to do is adjust both the angle and distance of the shadow behind the photo, and you could, if you really wanted to, try to make these adjustments by fiddling around with the separate Angle and Distance options in the dialog box until you find settings that look good:

The Angle and Distance options.

But why do that when there's a much easier and faster way! To adjust both the angle and distance at the same time, and make the adjustments visually (even better!), simply click anywhere inside the document and, with your mouse button still held down, drag the shadow around with your mouse! As you drag, not only will you see the shadow moving around behind the image, but you'll also see the Angle and Distance options changing in the Layer Style dialog box: 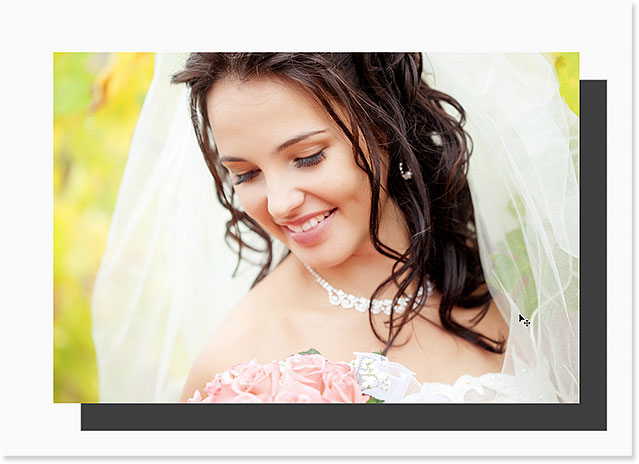 Clicking and dragging inside the document to move the drop shadow around.

Obviously, I've dragged the shadow too far away from the photo (just so we could see what was happening) so I'll drag it back in closer to a more reasonable distance: 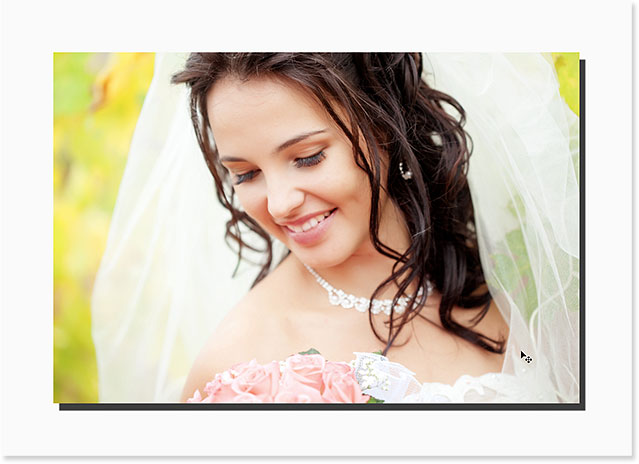 The drop shadow has been dragged into position.

Once you have your drop shadow in place, click on the Size slider in the Layer Style dialog box and drag it towards the right to soften (feather) the shadow's edges. Just as with the Width and Height values in the Canvas Size dialog box, the value you need here will depend largely on the size of your photo so you'll want to keep an eye on the document as you drag. For me, a value of somewhere around 50 px looks good:

Dragging the Size slider to soften the shadow edges.

Here's the effect after softening the edges: 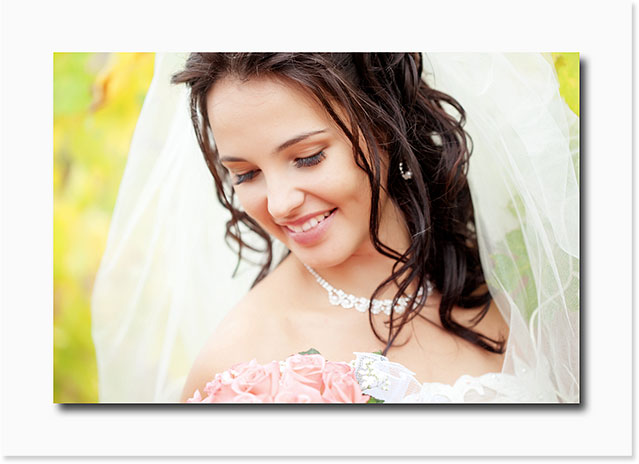 The shadow edges are now softened.

Finally, lower the Opacity value at the top of the dialog box to reduce the intensity of the shadow. A value of between 40-50% usually works well. I'll lower mine to 40%:

Lowering the opacity the drop shadow.

Click OK to close out of the Layer Style dialog box, and we're done! Here, after lowering the opacity, is my final result:

If we take a final look in the Layers panel, we see the Drop Shadow layer style listed directly below the "photo" layer. Layer styles in Photoshop are both non-destructive and eternally re-editable, so if you're not quite happy with how your shadow looks, simply double-click directly on the words "Drop Shadow" to re-open the Layer Styles dialog box and make any changes you need:

Double-click on the layer style to re-edit its settings.

And there we have it! That's how to quickly add extra canvas space and a drop shadow to an image to create a simple yet stylish border with Photoshop! Visit our Photo Effects section for more Photoshop effects tutorials!