How To Lighten And Brighten Eyes In Photoshop

In this Photo Retouching tutorial, we'll learn a fast and easy way to lighten and brighten someone's eyes in a photo using nothing more than a simple adjustment layer, a layer blend mode and a brush! I'll be using Photoshop CS5 here but any recent version of Photoshop will work.

And here's what the image will look like after lightening the eyes: 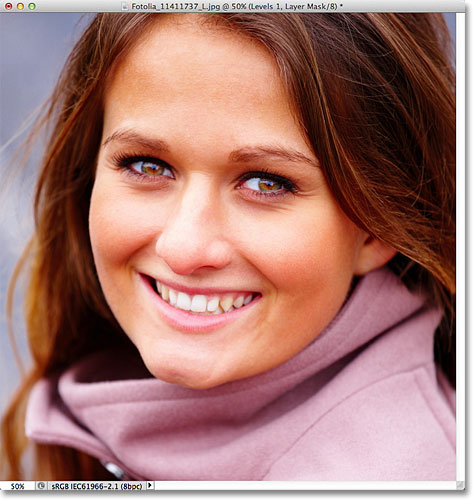 Before we begin, let's take a quick look in my Layers panel so we can see that at the moment, all I have in my document is a single layer - the Background layer - which holds my original image:

To brighten the woman's eyes, the first thing we need to do is add a Levels adjustment layer above the image. Click on the New Adjustment Layer icon at the bottom of the Layers panel:

Choose Levels from the list of adjustment layers that appears:

The adjustment layer appears above the Background layer.

Even though we've made no changes to any of the controls or options in the Levels adjustment layer, we can still use it to brighten the woman's eyes simply by changing the adjustment layer's blend mode. You'll find the blend mode option in the top left corner of the Layers panel. By default, it's set to Normal. Click on the word Normal, which opens a list of all the blend modes we can choose from, and select Screen:

Changing the blend mode of the adjustment layer from Normal to Screen. 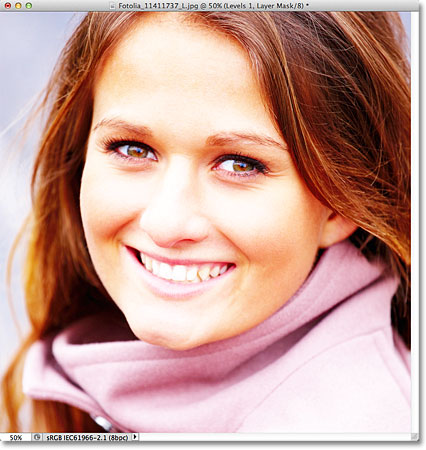 The layer mask on the adjustment layer is filled with white.

Let's hide the effects of the adjustment layer so it's not visibly affecting any part of the image, and we can do that by filling its layer mask with black. Go up to the Edit menu in the Menu Bar along the top of the screen and choose the Fill command:

Changing the Use option to Black.

If we look again at the layer mask thumbnail in the Layers panel, we see that it's now filled with black:

The layer mask for the adjustment layer is now filled with black.

With the mask filled with black, the effects of our Levels adjustment layer are now completely hidden and we're back to seeing our original image in the document window. It's important to note here that the adjustment layer is still brightening the image, just as we saw a moment ago. The only difference is that we can no longer see the brightening effect because it's being hidden from view by the mask. We're going to selectively bring back the lightening over the woman's eyes in the next step:

Back to the original photo.

Select the Brush Tool from the Tools panel:

Grabbing the Brush Tool from the Tools panel.

Step 5: Paint With White Inside The Eyes

Make sure the Foreground color (upper left swatch) is set to white.

Then, with your brush in hand and white as the brush color, simply paint inside the iris (the colored area in the center) of one of the eyes. You'll want to use a fairly small brush for this, and the easiest way to adjust your brush size is from the keyboard. Pressing the left bracket key ( [ ) will make the brush a little smaller each time you press it, while pressing the right bracket key ( ] ) will make the brush a bit larger. As you paint over the iris, you'll see the lightening effect from the adjustment layer being revealed. Here, I'm painting inside the eye on the left. Notice that it's now appearing much lighter than the other eye which is still at its original brightness level:

Painting inside the iris of the eye on the left of the photo.

Once you've lightened the first eye, do the same thing with the other eye, painting inside the iris with white to reveal the lightening effect. When you're done, both eyes should appear brighter:

Painting with white inside the other eye.

If you find that the eyes now appear too bright, you can dial-down the brightness simply by lowering the opacity of the adjustment layer. You'll find the Opacity option directly across from the blend mode option at the top of the Layers panel. By default, layer opacity is set to 100%. The lower we set it, the more the original photo below the adjustment layer will show through. I'm going to fine-tune my result by lowering the opacity down to around 65%:

Lower the opacity of the adjustment layer to reduce the brightness in the eyes.

And with that, we're done! Here once again is the original untouched image:

And here's the result after lightening the eyes:

And there we have it! That's how to quickly lighten someone's eyes in an image with Photoshop! If you haven't done so already, be sure to check out our related photo retouching tutorial, Changing Eye Color In An Image, as well as our Radial Zoom Enhanced Eyes photo effect tutorial! Or check out our Photo Retouching section for more Photoshop image editing tutorials!