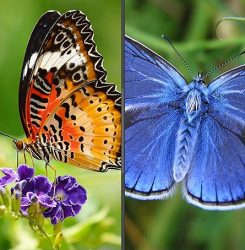 How to View Multiple Images at Once in Photoshop

Learn how Photoshop's multi-document layouts make it easy to view and arrange multiple open images on your screen at once! Part of our Photoshop Interface series. For Photoshop CC and CS6.

In the previous tutorial, we learned how to work with tabbed documents and floating document windows in Photoshop. We learned that when we open multiple images at once, Photoshop displays them as a series of tabbed document windows. It's easy to switch between open images just by clicking on their tabs. Yet by default, no matter how many images we've opened, Photoshop only lets us view one image at a time.

There is a way, however, to view two or more images on your screen at once. To view multiple images, we use Photoshop's multi-document layouts. These layouts are found under the Arrange menu. Let's see how they work.

This is lesson 7 of 10 in our Learning the Photoshop Interface series.

I'll start by opening a couple of images into Photoshop. Since this tutorial continues from the previous tutorial, I'll use the same images again. Here, I've used Adobe Bridge to navigate to a folder containing my three images. Rather than opening all three at once into Photoshop, I'll start by opening just two of them. To select the images, I'll click on the thumbnail for the first image on the left. Then, to select the middle image as well, I'll press and hold my Shift key and I'll click on the middle thumbnail. With the first two images now selected, I'll open them into Photoshop by double-clicking on either of the thumbnails:

In Adobe Bridge, selecting and opening the first two images into Photoshop.

Both images open in Photoshop as tabbed documents. But we can only see one document at a time. The other document is hidden behind the visible one (butterfly on flower photo from Adobe Stock): 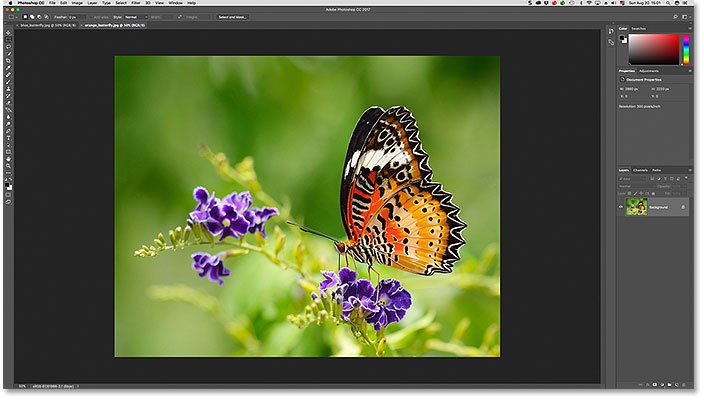 The images open as tabbed documents. Only one of the documents is visible.

Clicking the tabs to switch between open images.

This hides the original image and shows me the other image I've opened (blue butterfly photo from Adobe Stock): 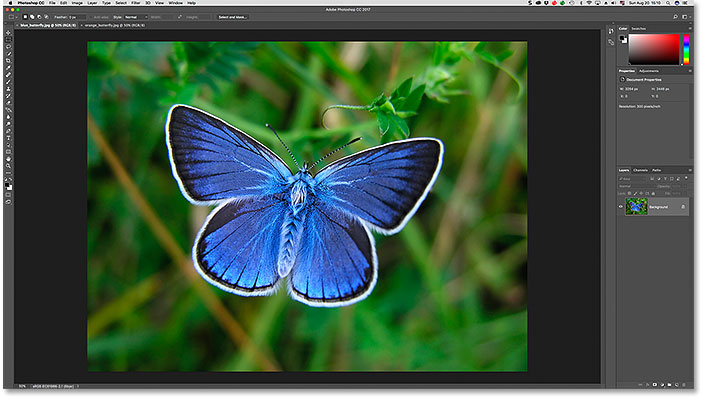 The original image is now hidden behind the new image.

To view both open images at once, we can use Photoshop's multi-document layouts. To find them, go up to the Window menu in the Menu Bar along the top of the screen. Then, choose Arrange. The various layouts are grouped together at the top of the menu. Depending on how many images you've opened, some of the layouts may be grayed out and unavailable. In my case, since I've opened only two images, the layouts for viewing three or more documents are grayed out:

The multi-document layout options in Photoshop.

I'll select the 2-up Vertical layout: 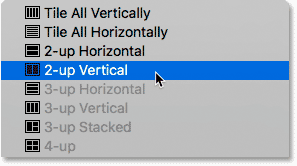 Selecting the "2-up Vertical" layout.

This displays both of my open documents side-by-side, allowing me to view both images at once: 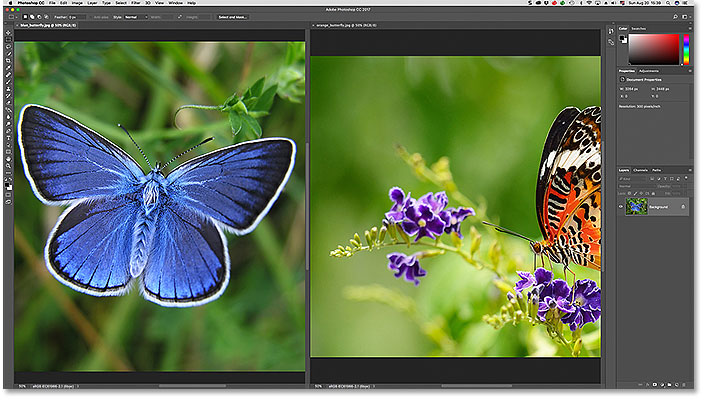 The "2-up Vertical" layout.

Photoshop highlights the tab of the active document window.

So far, we've seen that we can easily view two images at once in Photoshop using the "2-up Vertical" layout. Let's see what happens if I open a third image while still using the same two-document layout. I'll switch back over to Adobe Bridge. Then, I'll open my third image ("yellow_butterfly.jpg") into Photoshop by double-clicking on its thumbnail (swallowtail butterfly photo from Adobe Stock):

Selecting and opening a third image from Bridge into Photoshop. 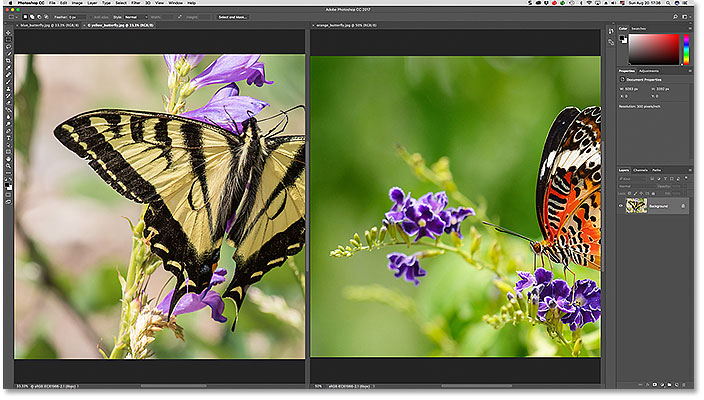 Photoshop grouped the third image into the document window on the left.

Just like with normal tabbed documents, Photoshop only displays one image inside a group at a time. Click the tabs to switch between images in the group. At the moment, my "yellow_butterfly.jpg" document is visible on the left. I'll switch back to viewing my "blue_butterfly.jpg" image by clicking its tab:

Switching between grouped documents by clicking the tabs.

And now the "blue_butterfly.jpg" image is once again visible in the left window: 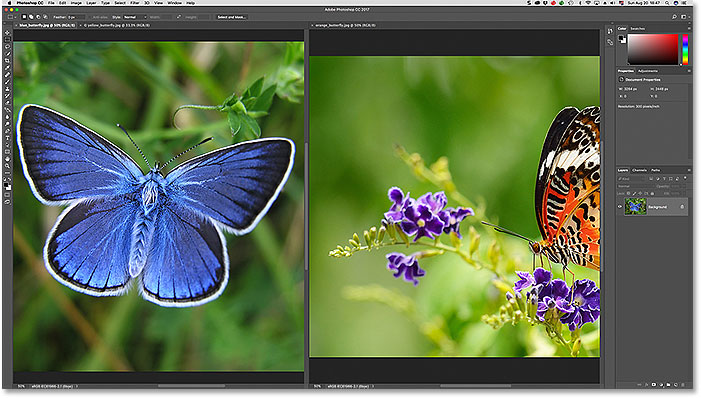 The visible image in the left document window has changed.

Changing The Order Of Tabbed Documents In A Group

Also like normal tabbed documents, we can change the order of the tabs within a group. Click on the tab of the document you want to move. Then, with your mouse button still held down, drag the tab to the left or right of the other tab(s) within the same group. Release your mouse button to drop the tab into place:

Click and drag the tabs in a document group to change their order.

What if I wanted my blue butterfly to be grouped in with the orange butterfly in the window on the right? To move a tabbed document from one window to another, click and hold on the tab of the document you want to move in the first window. Then drag the tab left or right into the tab area along the top of the other document window. When a blue highlight box appears around the window, release your mouse button to drop the document into the new window: 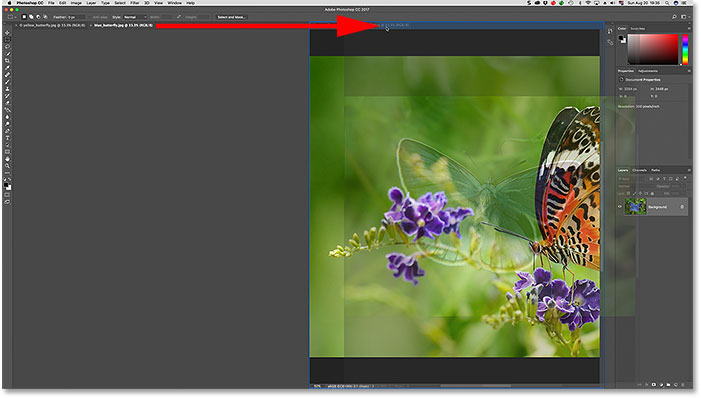 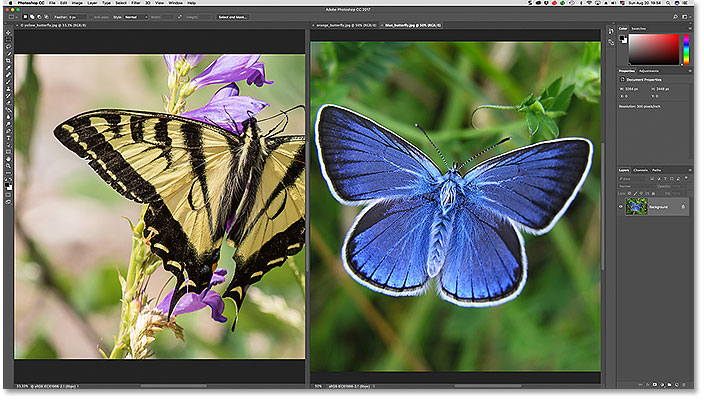 To view all three images at once in Photoshop, all I need to do is switch from the "2-up Vertical" layout to a three-document layout. To switch layouts, I'll go back up to the Window menu and choose Arrange. This time, I'll choose 3-up Vertical:

Going to Window > Arrange > 3-up Vertical.

And now all three images appear in their own separate document windows, allowing me to see all three at once: 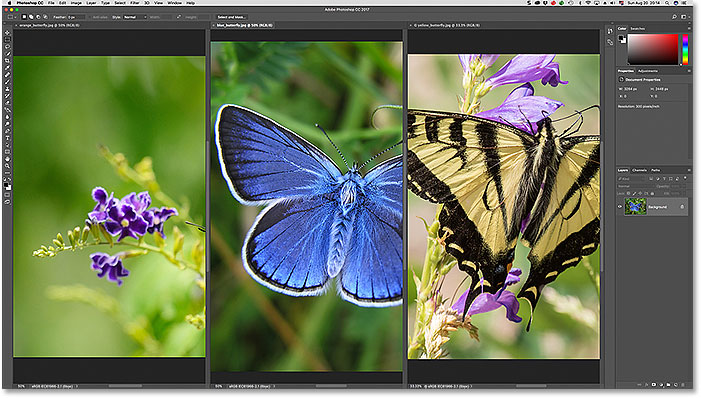 The "3-up Vertical" layout.

Let's learn how to zoom and pan images within a multi-document layout. We'll start with panning.

To pan, or scroll, a single image within a multi-document layout, first click anywhere inside the image to make its document window active. Then, press and hold the spacebar on your keyboard. This temporarily switches you to Photoshop's Hand Tool. You'll see your mouse cursor change into a hand icon. With the spacebar held down, click on the image and drag it into position. 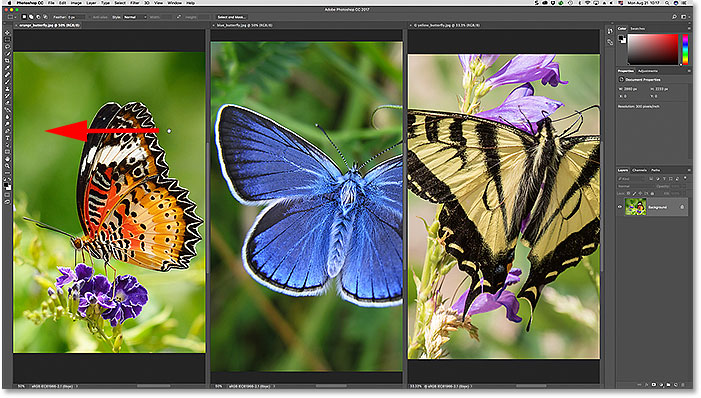 Panning the image on the left to center the butterfly in the document window.

Panning All Images At Once

To pan all open images at once, press and hold your Shift key and the spacebar. Click and drag any image within the layout to reposition it. The other images will move along with it.

Zooming In And Out Of An Image

To zoom in on a single image in a multi-document layout, first click on the image to make its document window active. Then, press and hold Ctrl+spacebar (Win) / Command+spacebar (Mac). This will temporarily switch you to Photoshop's Zoom Tool. Your cursor will change into a magnifying glass with a plus sign (+) in the center. Click on the image to zoom in on that spot. Click repeatedly to zoom in further.

Here, I've zoomed in on the blue butterfly in the middle document: 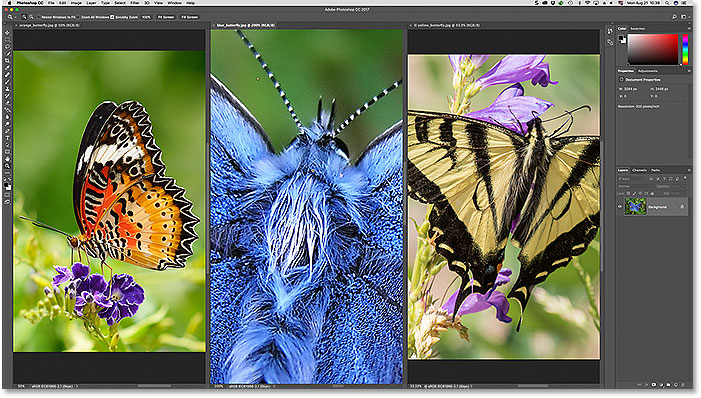 Zooming in on a single image within the layout.

To zoom out, press and hold Ctrl+Alt+spacebar (Win) / Command+Option+spacebar (Mac). You'll see the same magnifying glass cursor icon but with a minus sign (-) in the center. Click on the image to zoom out from that spot. Click repeatedly to zoom out further.

Zooming In Or Out Of All Images At Once

Matching The Zoom Level And Position Of All Images 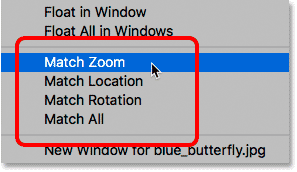 The Match Zoom, Location, Rotation and All options.

Switching Back To The Default Tabbed Layout

Finally, to revert your layout back to the default, with only one image visible at a time, go up to the Window menu, choose Arrange, and then choose Consolidate All to Tabs: 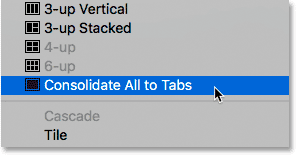 Going to Window > Arrange > Consolidate All to Tabs.

And now my images are back to the standard, tabbed document layout: 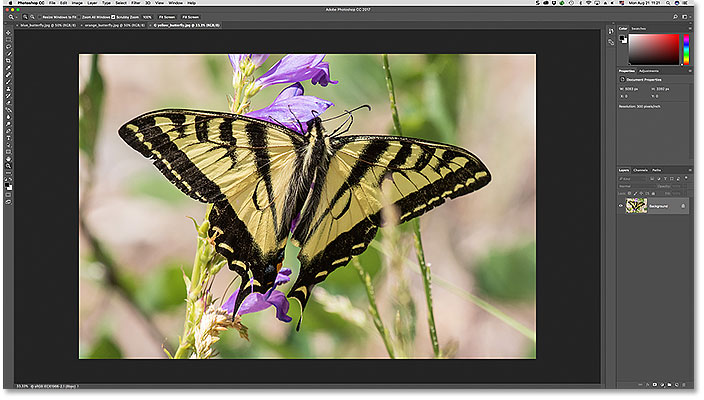 Back to Photoshop's default document layout.

And there we have it! That's how to view and work with multiple open images at once using multi-document layouts in Photoshop! In the next lesson, we'll learn how to move images between documents in Photoshop!

You can jump to any of the other lessons in this Learning the Photoshop Interface chapter. Or visit our Photoshop Basics section for more topics!