In this Photoshop Effects tutorial, we'll learn how to give someone's eyes a fun, easy to create "zoom" effect, with blur streaks that appear to zoom out from the center of the eyes. We'll also bump up the brightness and color saturation of the eyes at the same time, all using Photoshop's Radial Blur filter, a basic selection tool, a simple layer mask, and a layer blend mode!

This version of the tutorial is compatible with Photoshop CS5 and earlier. For Photoshop CS6 and CC (Creative Cloud), check out our fully updated version.

I'm going to start with the eye on the left of the photo. We'll go through the steps needed to create the effect in one eye, then it's simply a matter of repeating the same steps for the other eye. To begin, select the Elliptical Marquee Tool from the Tools panel. By default, it's hiding behind the Rectangular Marquee Tool, so click on the Rectangular Marquee Tool and hold your mouse button down until a fly-out menu appears listing the other tools that are available in that same spot. Choose the Elliptical Marquee Tool from the list: 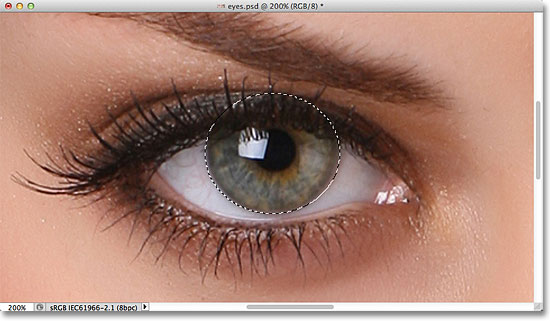 The initial elliptical selection extends up into the eyelid, but we'll fix that next.

To remove the part of the selection that extends over the eyelid, with the Elliptical Marquee Tool still selected, I'll choose the Intersect With Selection option in the Options Bar by clicking on its icon:

Clicking on the Intersect With Selection icon (fourth icon from the left in the row). 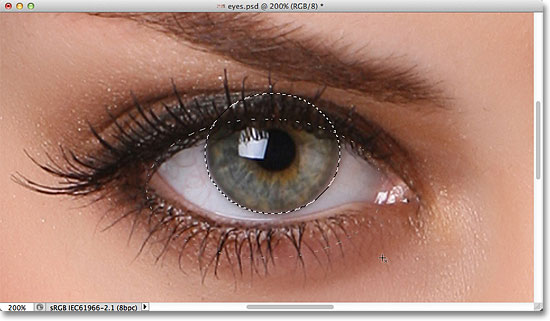 Drawing a second selection around the part of the initial selection I want to keep.

With my second selection outline in place, I'll release my mouse button, and because I was in the Intersect With Selection mode, Photoshop keeps only the part of the initial selection that was surrounded by the second selection. The unwanted top area over the eyelid is now gone: 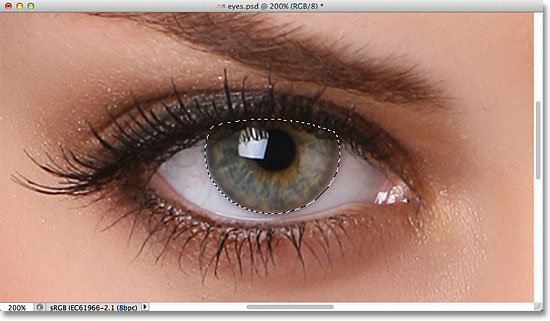 The top part of the initial selection has been removed.

Step 3: Copy The Selection To A New Layer

Next, we'll copy our selection to a new layer. Hold down your Alt (Win) / Option (Mac) key and, with the key still held down, go up to the Layer menu in the Menu Bar along the top of the screen, choose New, then choose Layer via Copy:

Holding down the Alt (Win) / Option (Mac) key as we select the command tells Photoshop to first pop open the New Layer dialog box for us so we have a chance to name the new layer before it's added. Name the layer "Left Eye" (or "Right Eye" if you're working on the right eye):

Click OK when you're done to close out of the dialog box. Nothing will seem to have happened in the document window (except that the selection outline will disappear), but we can see in the Layers panel that our selection is now sitting on its own layer directly above the main photo on the Background layer:

The selection now appears on its own layer above the photo.

Step 4: Draw A Circular Selection Around The Iris

With the Elliptical Marquee Tool still selected in the Tools panel, click in the very center of the pupil (the black area in the center of the eye), then begin dragging out another elliptical selection outline. Once you've started dragging, press and hold Shift+Alt (Win) / Shift+Option (Mac) on your keyboard, then continue dragging. Holding the Shift key down as you drag will force the selection into a perfect circle, while the Alt (Win) / Option (Mac) key tells Photoshop to draw the selection outward from the point you clicked on. Draw your circular selection outward until it's just a bit larger than the iris. When you're done, release your mouse button, then release your Shift and Alt (Win) / Option (Mac) keys (make sure you release your mouse button before releasing the keys, otherwise you won't end up with a circular selection): 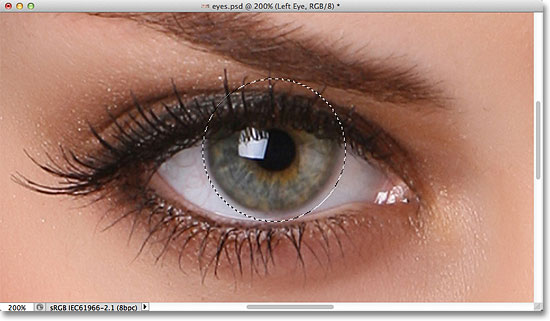 Draw a circular selection slightly larger than the iris.

Step 5: Add Noise To The Selection

Let's add some noise to our selection, which will help to create our blur streaks. For that, we'll use Photoshop's Add Noise filter. Go up to the Filter menu at the top of the screen, choose Noise, then choose Add Noise:

This opens the Add Noise dialog box. Set the noise Amount to around 10%, then make sure the Gaussian and Monochromatic options are both selected at the bottom of the dialog box:

Set the noise amount to 10% and make sure Gaussian and Monochromatic are selected.

Click OK to close out of the dialog box. The area inside the selection is now filled with noise: 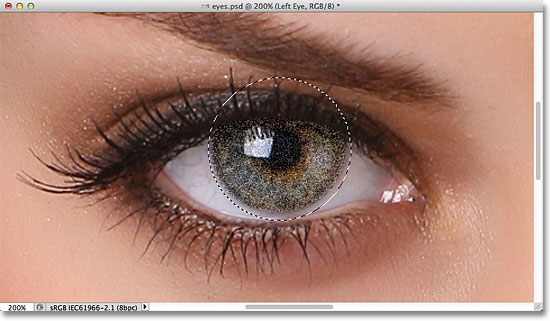 The image after adding noise to the selected area.

With the noise added, go back up to the Filter menu at the top of the screen and this time choose Blur, then Radial Blur:

This opens the Radial Blur filter's dialog box. Increase the Amount value at the top of the dialog box to around 80 or so, then set the Blur Method to Zoom and the Quality to Best. Don't touch the Blur Center box in the lower right of the dialog box. We want to leave the blur center exactly where it is (in the center) so that our blur streaks will appear to be zooming out from the center of our selection:

Click OK to close out of the dialog box. Photoshop applies the blurring to the selection which creates a "zoom" effect from the center of the eye: 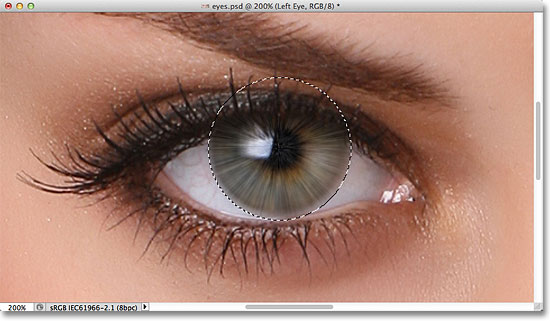 The image after applying the Radial Blur filter.

Step 7: Turn The Selection Into A Layer Mask

We need to clean up the area around the iris to remove the blur streaks that are extending into the white part of the eye, and for that, we'll use a layer mask. With your selection outline still active, click on the Layer Mask icon at the bottom of the Layers panel:

This adds a layer mask to the "Left Eye" layer, and because we had a selection active, Photoshop used the selection to create the mask. If we look at the layer mask thumbnail in the Layers panel, we see that the mask is filled with black except for a small area of white, which is the area that was inside of our selection outline. White areas on a layer mask represent the areas on the layer that are visible in the document, while black represents areas that are hidden:

The layer mask thumbnail tells us that a mask has been added to the layer.

We're going to paint away the unwanted blurred areas around the iris, which means we need Photoshop's Brush Tool. Select the Brush Tool from the Tools panel:

Step 9: Paint Away Any Unwanted Areas 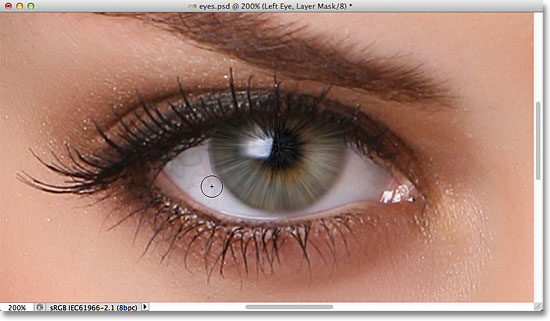 Paint with black to clean up the white part of the eye around the iris. 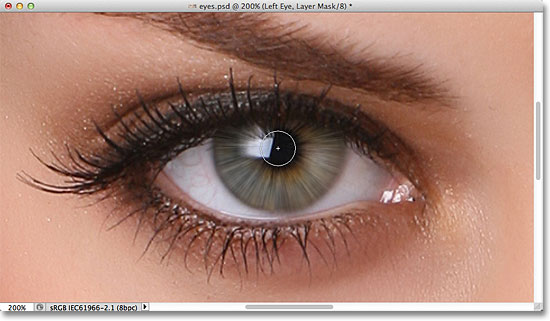 Painting away the blur streaks in the pupil.

We've created our zoom effect, so now let's brighten the iris and increase its color saturation. Hold down your Alt (Win) / Option (Mac) key and click on the New Adjustment Layer icon at the bottom of the Layers panel:

Choose Hue/Saturation from the list of adjustment layers that appears:

Holding down the Alt (Win) / Option (Mac) key while selecting the adjustment layer tells Photoshop to first pop open the New Layer dialog box, the same dialog box we saw back in Step 3. You can leave the adjustment layer's name set to its default, but select the option directly below the name, Use Previous Layer to Create Clipping Mask, by clicking inside its checkbox. Then change the Mode (the layer blend mode) of the adjustment layer from Normal to Screen:

Select "Use Previous Layer to Create Clipping Mask" and change the Mode to Screen.

The Screen blend mode is one of several layer blend modes in Photoshop that has the effect of lightening the image, and with the Hue/Saturation adjustment set to Screen, the iris in the eye is now much brighter: 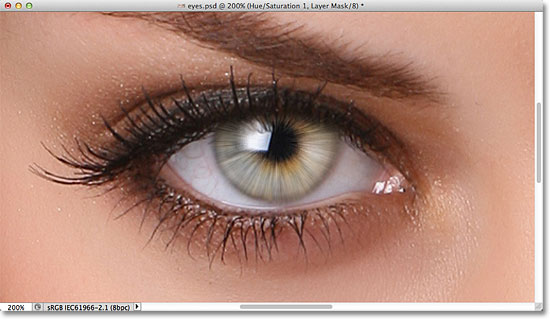 The iris is now brighter thanks to the Screen blend mode.

We can increase the color saturation in the iris as well. If you're using Photoshop CS4 or higher, you'll find the controls and options for the Hue/Saturation adjustment layer in the Adjustments Panel which was first introduced in CS4. For Photoshop CS3 and earlier users, a separate Hue/Saturation dialog box will be open on your screen. To increase color saturation in the iris, drag the Saturation slider towards the right. Keep an eye on the effect in the document window as you drag the slider so you don't push the Saturation level too far. I'm going to set my Saturation value to around 60: 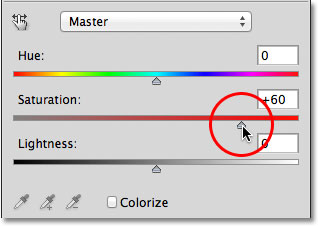 Drag the Saturation slider towards the right to boost color saturation in the iris.

For Photoshop CS3 and earlier users, click OK when you're done to close out of the Hue/Saturation dialog box. Photoshop CS4 and higher users can leave the Adjustments Panel open. Here's my image after boosting color saturation in the iris. Depending on the original eye color, the increased saturation may appear subtle, as it is here, or more intense: 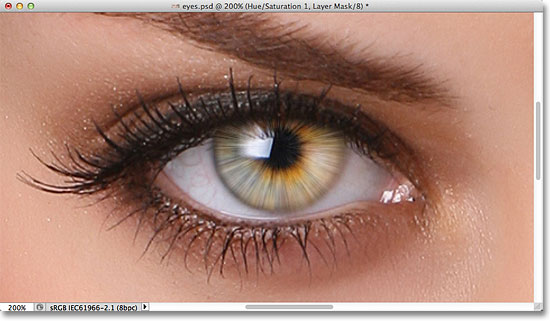 The image after increasing color saturation in the iris.

As I mentioned, the Screen blend mode is just one of several layer blend modes in Photoshop designed to lighten the image, and it's by far the most commonly used of the lightening modes. However, for a different result, try changing the blend mode of the Hue/Saturation adjustment layer to either Color Dodge or Linear Dodge, both of which will give a stronger, more intense result. I'll change my blend mode from Screen to Color Dodge:

Changing the blend mode of the adjustment layer to Color Dodge.

Here's the result that Color Dodge gives me: 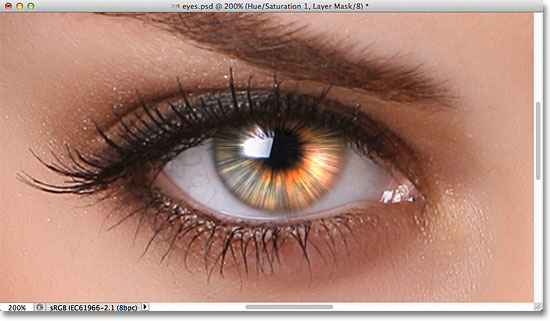 The image after changing the blend mode to Color Dodge.

Next, I'll try changing the blend mode from Color Dodge to Linear Dodge:

And here's the result. In my case with this image, I think the Linear Dodge blend mode gives me the best result, but be sure to try all three blend modes and choose the one that works best for your image: 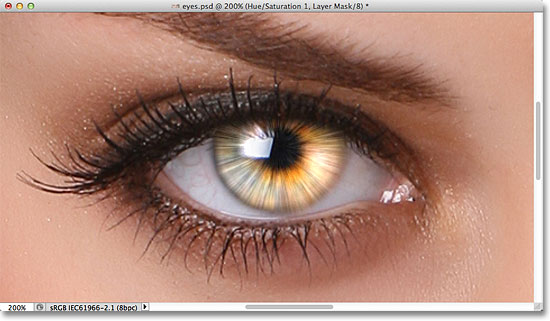 Step 12: Fine-Tune The Result With The Layer Opacity Option

Once you've decided on a blend mode to use, you can further fine-tune the results by lowering the adjustment layer's opacity value which controls the layer's level of transparency. You'll find the Opacity option directly across from the Blend Mode option at the top of the Layers panel. I'm going to leave mine set to 100%, but if needed, you can reduce the intensity of the brightening effect simply by lowering the opacity value:

Lower the Opacity value if needed to reduce the brightness.

After you've completed the effect in one eye, simply repeat the same steps with the other eye. However, before you begin, make sure you re-select the original image by clicking on the Background layer in the Layers panel to make it active:

Make sure you re-select the Background layer before starting on the other eye.

With the Background layer re-selected, you can repeat the same steps to add the effect to the other eye. Here's what my final result looks like:

And there we have it! That's how to give eyes a "radial zoom" effect with Photoshop! Visit our Photo Effects section for more Photoshop effects tutorials!