Home > Photo Effects > Placing An Image Inside Of Another

Placing An Image Inside Of Another With Photoshop

In this Photoshop Effects tutorial, we're going to learn how to place an image inside of another image using the "Paste Into" command in Photoshop.

With this year's Super Bowl coming up (at the time I'm writing this), all of the major electronics stores have been filling their websites and weekly flyers with pictures of the latest high definition tv's showing the big game. If it's not a major sports event being displayed on the screens, it's usually the latest blockbuster DVD movie release or big budget video game.

Of course, none of these images are really being displayed on the screen, since it's next to impossible to take a high quality photo of something appearing on tv. It's all done in Photoshop. An image of whatever it is they want to have appearing on tv is simply pasted into the image of the tv itself. In this Photoshop tutorial, we're going to see how it's done so you can use the same technique with your own images!

Note that this version of the tutorial is for Photoshop CS4 and earlier. For Photoshop CS5, CS6 and CC users, or for another example of how this technique can be used, check out our fully updated version.

Here, I have an image of the sort of tv you'd probably find in an electronics store's flyer: 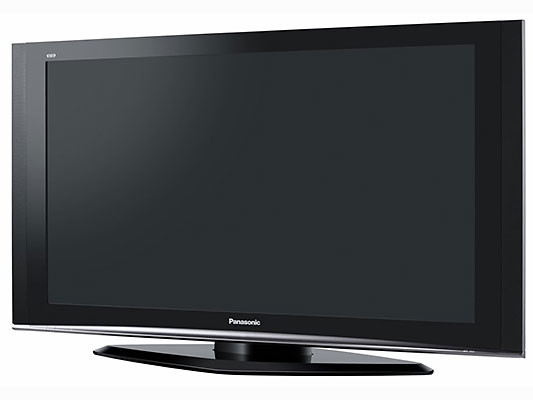 An image of a tv, similar to what you'd find on an electronics store's website or in their weekly flyer.

And here's the image I want to have appearing on the tv: 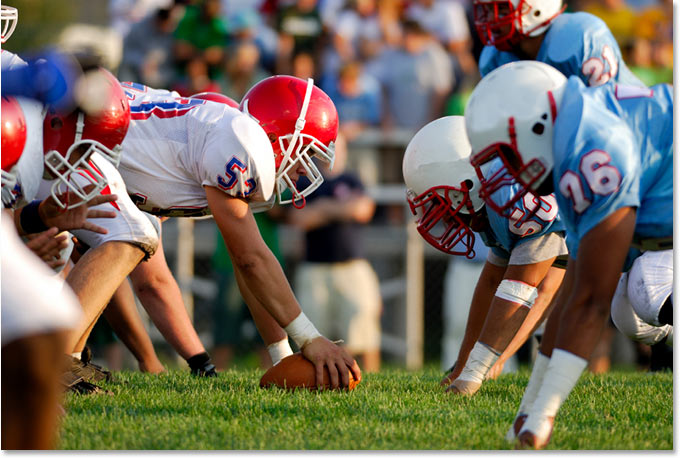 A photo of a football game.

Here's what it's going to look like when we're done: 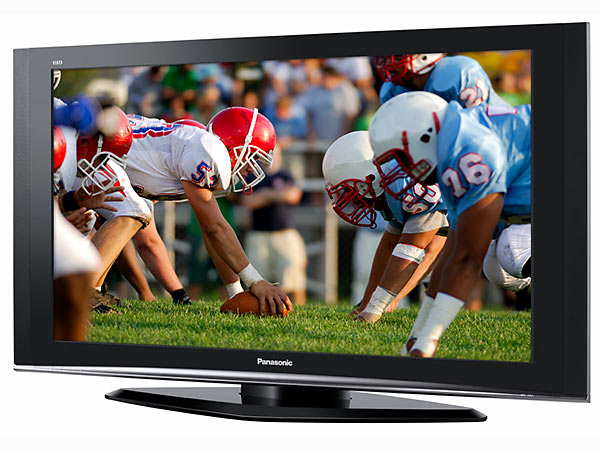 The game now appears to be displaying on the tv screen.

How To Place One Image Inside Of Another

Step 1: Select The Area You Want To Paste The Second Image Into

First, open the image you want to place the second image into and draw a selection around the area where the second image is going to appear. The selection tool you use will of course depend on the shape of the area you need to select. I want my second image to appear inside the tv screen, which is a simple four-sided shape, so I'm going to use Photoshop's Polygonal Lasso Tool, which by default is hiding behind the standard Lasso Tool in the Tools palette. I'm going to click on the Lasso Tool icon, then I'll hold my mouse button down for a second or two until the fly-out menu appears, and then I'll select the Polygonal Lasso Tool from the list:

Selecting the Polygonal Lasso Tool from the Tools palette in Photoshop.

The Polygonal Lasso Tool allows you to draw a selection by simply clicking at different points where the direction of the selection needs to change. Each time you click at a new point, Photoshop will add a straight line between the new point and the last point you clicked on, similar to how the Pen Tool works when drawing straight path segments. You simply continue clicking around the area that needs to be selected until you've outlined the entire area and you've made your way back to the beginning. When you click again on that first point, Photoshop will create the selection. 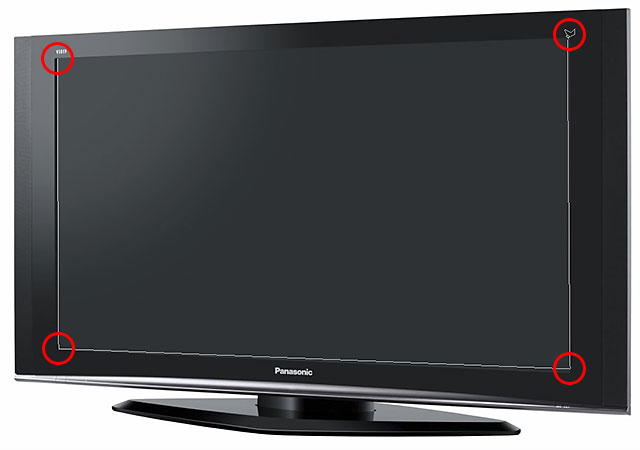 Clicking in each corner of the tv screen with the Polygonal Lasso Tool to draw a selection around it.

To complete the selection, I'll click once again on the same spot I started with in the top left corner of the tv screen, and Photoshop will create my selection for me: 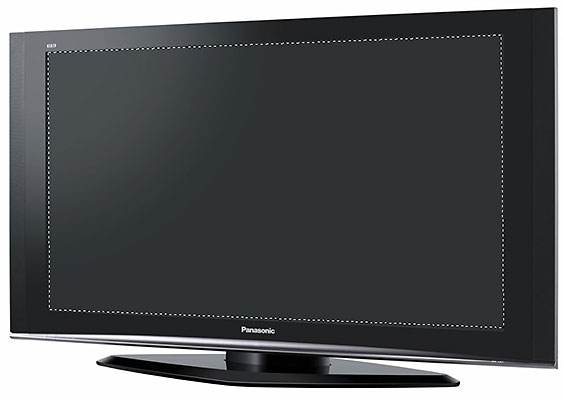 Click again on the initial point to complete the selection.

Step 2: Copy The Second Image To The Clipboard

Open your second image in Photoshop and press Ctrl+A (Win) / Command+A (Mac) to place a selection around the entire image: 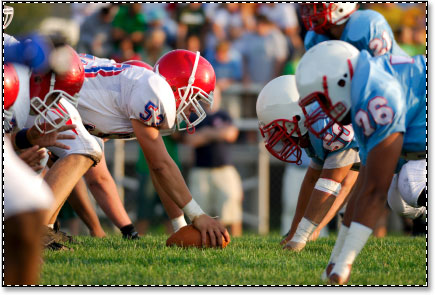 Press "Ctrl+A" (Win) / "Command+A" (Mac) to place a selection around the entire image.

Then press Ctrl+C (Win) / Command+C (Mac) to copy the image to the clipboard.

Step 3: Paste The Second Image Into The Selection

Switch back to your original image in Photoshop. You should still see the selection you created a moment ago. We're going to paste the second image directly into this selection. To do that, go up to the Edit menu at the top of the screen and choose Paste Into:

Selecting "Paste Into" from the "Edit" menu.

First, let's look at the Layers palette for the original image to see what's happened. We can see that I now have two layers - the original Background layer on the bottom which contains my tv image, and the new layer, "Layer 1", above it which contains the football photo. We can also see the layer mask thumbnail (circled in red) showing us the layer mask that was created. The white, rectangular-shaped area in the center of the thumbnail is the area that was selected (the tv screen), and all the black area around it is the area that was not selected:

Photoshop adds a new layer to the original image, places the second image on to the new layer, and creates a layer mask based on the selection we made in Step 1.

And if we look at the image itself, we can now see the football image appearing on the tv screen: 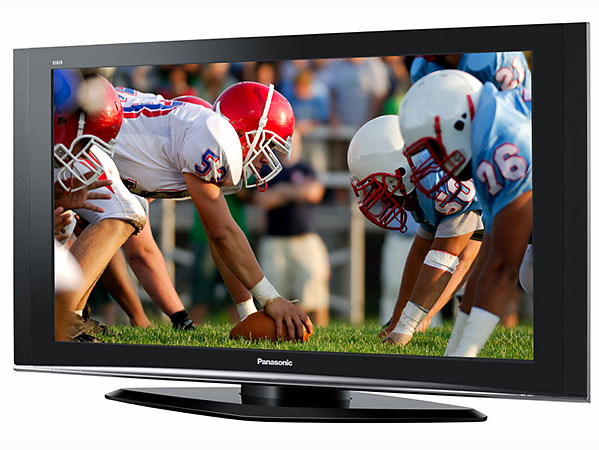 The second image now appears inside the selection we made in the original image.

The only problem at the moment is that the tv is on an angle and the photo I've pasted into it is not, so the perspective between the two images isn't matching up. To fix that, I'll press Ctrl+T (Win) / Command+T (Mac) to bring up Photoshop's Free Transform box and handles around the second image. The first thing I'm going to do is try to fit as much of the football photo into the tv screen as I can, so I'll hold down Shift+Alt (Win) / Shift+Option (Mac) and drag one of the four corner handles in towards the center to make the image smaller. Holding "Shift" constrains the proportions of the image as I drag so I don't accidentally distort the look of the image, and holding down "Alt/Option" tells Photoshop to resize the image from its center, which makes things easier: 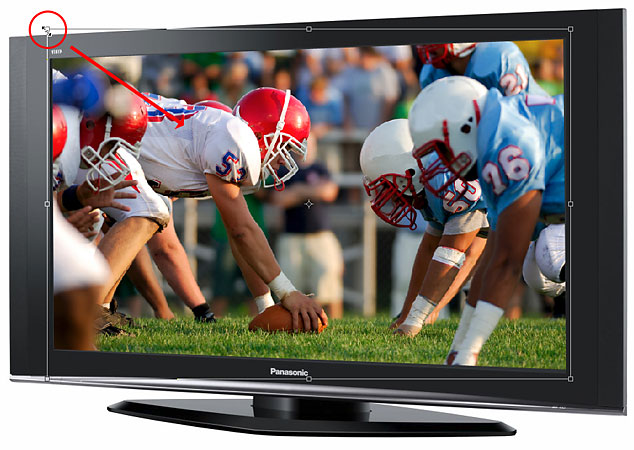 Resize the image as needed with Photoshop's "Free Transform" command.

In Perspective transform mode, I'm going to click again on the handle in the top left corner and drag it down a little. As I drag the top left corner handle down, the handle in the bottom left corner is going to move up at the same time. This will allow me to reduce the height of the left side of the football image without affecting the height of the right side of the image, creating the illusion that the image is on the same angle as the tv: 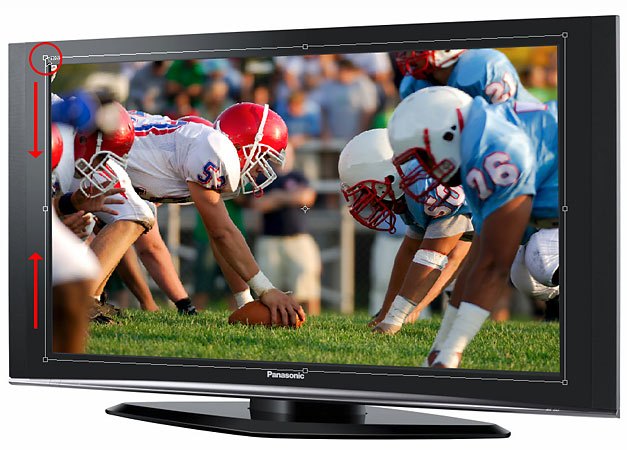 Use "Perspective" transform mode to correct any perspective problems between the two images.

Now that I'm happy with the size and angle of the second image, I'll press Enter (Win) / Return (Mac) to accept the changes and exit out of the Free Transform command.

To finish off the effect, I'm going to add a slight shadow to the edges of the football image so it looks more like it's actually displaying on the tv screen and less like someone just pasted it on there (even though that's exactly what we did). With "Layer 1" selected, I'll click on the Layer Styles icon at the bottom of the Layers palette and I'll select Inner Shadow from the list of layer styles:

Click on the "Layer Styles" icon at the bottom of the Layers palette and select "Inner Shadow" from the list.

This brings up Photoshop's Layer Style dialog box set to the Inner Shadow options in the middle column. Lower the Opacity of the Inner Shadow to around 60% so it's not quite as intense, then lower both the Size and Distance down to 1 px. You may also need to adjust the Angle of the shadow depending on your image. I have mine set to 120°:

Change the options for the Inner Shadow layer style circled above.

Click OK to exit out of the Layer Style dialog box and apply the shadow, and you're done! Here, after adding my shadow effect around the edges of the football image so it looks more natural on the tv screen, is my final result:

And there we have it! In this tutorial, we learned how to place one image inside of another with Photoshop! Visit our Photo Effects section for more Photoshop effects tutorials: