In this photo editing tutorial, we'll learn how to quickly correct overall tonal problems in an image using the Levels adjustment in Photoshop. In a previous tutorial, we looked at how to fix both tone and color cast problems at once using the Levels command, but a more common first step in a good photo editing workflow is to simply correct any tonal problems, brightening highlights, darkening shadows and adjusting the midtones, leaving any needed color corrections for later steps.

As we'll see, the Levels adjustment makes tonal correction so fast and easy, you'll be turning dull, lifeless images into ones that seem to pop right off the screen in a matter of seconds. And unlike the Brightness/Contrast adjustment in Photoshop CS3 and higher which doesn't give you a great deal of control and relies mainly on your own personal opinion of what looks good, the Levels adjustment is what the pros use for accurate, professional quality results.

Here's an image I have open on my screen: 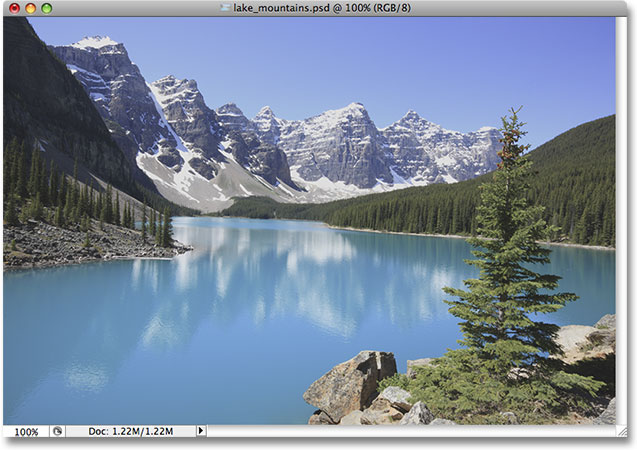 The photo is looking a little flat and dull, so I'm going to view the image histogram to see if I can spot the problem. The fastest way to view the histogram is in the Histogram palette which you'll find grouped in with the Navigator and Info palettes. By default, the Histogram palette is set to Compact View mode, which only displays 100 brightness values in the histogram, not enough for serious image editing. You'll want to click on the menu icon in the top right corner of the palette and select Expanded View from the list, which displays the full 256 brightness values. Also, make sure the Channel option above the histogram is set to RGB.

The histogram shows why the image is looking rather dull. Notice how the edges of the histogram do not extend all the way to the far left or right. This tells us that there is currently nothing in our image that's pure black or pure white, which means our shadow areas are not as dark as they could be and our highlights are not as bright as they could be, resulting in the image's flat appearance (be sure to check out our How To Read A Histogram tutorial for a more detailed explanation of how histograms work):

The Histogram palette showing that the shadows and highlights could both use a boost.

Click on the New Adjustment Layer icon in the Layers palette and select Levels from the list.

First, let's take a closer look at the problems, since they're easier to understand in the Levels dialog box. Below the histogram in Levels is a horizontal gradient going from pure black on the left to pure white on the right. The brightness levels in the histogram match up perfectly with the brightness levels in the gradient below it. If we draw lines from the left and right edges of the histogram straight down to where the edges line up with the gradient, we can see more clearly where the current tonal range of our image falls. Notice that there's still quite a bit of room between the left edge of the histogram and pure black on the far left of the gradient, and between the right edge of the histogram and pure white on the far right of the gradient. This means that our blacks in the image are currently not pure black. They're a dark shade of gray, and our whites are not pure white but a light shade of gray:

The arrows show where the left and right edges of the histogram line up with the gradient.

If you look directly below the histogram, you'll see three small sliders, one on each end and one in the middle. The slider on the far left is the black point slider. It's easy to remember because the slider itself is black. The black point slider allows us to darken the shadow areas in the image by setting a new black point. The slider on the right is the white point slider. Again, it's easy to remember because the slider itself is white. With it, we can brighten the highlights by setting a new white point (this will all make sense in a moment). The slider in the middle is the midtone slider. It appears gray because it allows us to brighten or darken the brightness levels in between black and white:

The three sliders below the histogram allow us to adjust the black point (left slider), white point (right slider) and midtones (middle slider) in the image.

Let's fix the shadow areas first by setting a new black point. If it sounds complicated, it's not. All you need to do is click on the black point slider below the far left of the histogram window and drag the slider towards the right just to the point where the left edge of the histogram begins:

Drag the black point slider to the left edge of the histogram to set a new black point.

As you drag the slider towards the right, you'll see the dark areas of your image becoming progressively darker. By dragging the slider to the left edge of the histogram, those pixels in the image that were just a dark shade of gray a moment ago are forced to pure black, which causes all of the shadow areas in the image to become darker as well. Here's my photo after adjusting the black point. We can already see an improvement in image contrast: 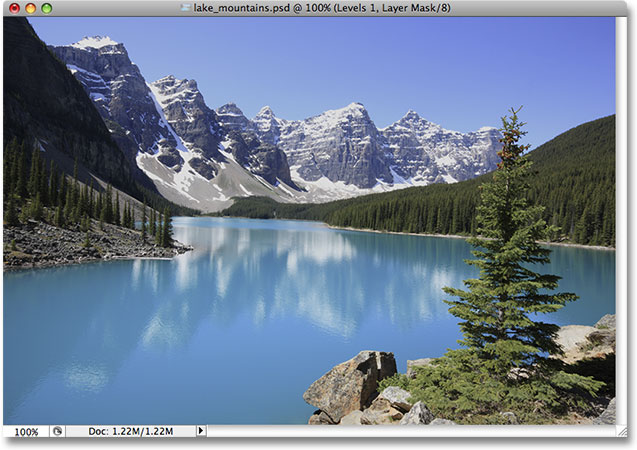 The Histogram palette updates to show the changes we made in the Levels dialog box.

The left edge of the histogram now extends all the way to the left, letting us know that we now have deep, dark shadows in our image thanks to our new black point. But notice also that the histogram suddenly seems to be missing sections, creating a comb-like effect. That's because we only have a set amount of image information in the photo to work with and by darkening the shadows, we've essentially spread out and stretched the image information like an accordion or a slinky. Those missing sections mean we no longer have any image detail at those brightness levels, but there's no need to worry because we haven't lost enough detail yet to make it noticeable. The unfortunate reality with photo editing is that with every edit we make to an image, we damage it in some way. All we can do is hope that the "damaged" version we end up with looks better to us than the original "undamaged" version did.

We still have a problem with the highlights, so we'll fix that next.

Correcting the problem with the highlights in the image is just as easy as correcting the shadows. Simply click on the white point slider and drag it towards the left just to the point where the right edge of the histogram begins:

Drag the white point slider to the right edge of the histogram to set a new white point.

As you drag the slider, you'll see the bright areas in the image becoming gradually brighter. With the white point slider moved to the right edge of the histogram, the pixels that were a light shade of gray a moment ago are forced to pure white, causing all of the light areas in the image to become lighter in the process. Here's my image after setting the new white point. The highlights are now nice and bright, and the overall image contrast has been greatly improved from how it looked originally: 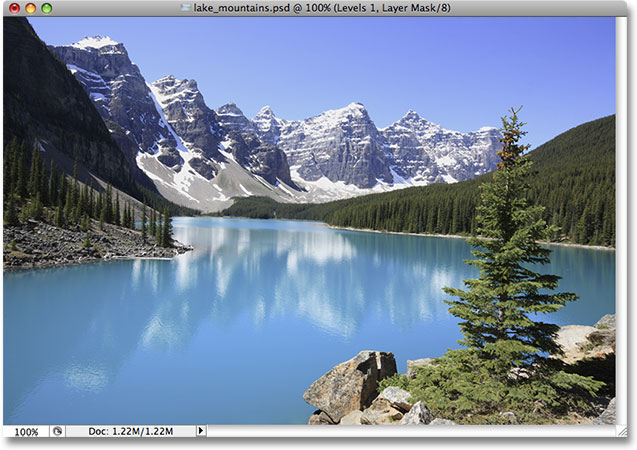 Both the shadows and highlights in the image have now been corrected.

Once again, if we look to the Histogram palette, we can see the effects of the changes we've made. The right side of the histogram now extends all the way to the right edge, telling us that our highlights are now nice and bright. And by forcing the highlights to white, we've stretched out our image information even further, losing more detail at various brightness levels and creating even more of a comb-like effect in the histogram:

The histogram now stretches from left to right, although some brightness levels have been lost.

As a side note, if you've been wondering why my histogram is showing a tall spike near the right edge, it's because this particular photo that I'm working with consists mainly of a light blue lake and a light blue sky. In other words, it's made up mostly of light blue, which means the majority of the pixels in the image have a similar brightness value. Since the histogram shows us a comparison of the various brightness levels in the image, having so many pixels sharing a similar brightness value is causing that level to tower over the others. All photos are different, and if you're following along with your own image, your histogram will undoubtedly look different from mine.

Drag the midtone slider towards the left to lighten the midtones or the right to darken them.

Let's check out the Histogram palette one last time. If you look closely, you'll notice that the left side of the histogram now seems to be missing fewer brightness levels than the right side does. That's because by darkening the midtones, we've taken image information from the lighter tonal values and pushed it into the darker values. This filled up some of the missing shadow areas but stretched out the lighter areas even further:

The histogram now shows less information remaining in the highlights than in the shadows after darkening the midtones.

Again, even though the histogram now looks like we're missing quite a bit of detail (which we are), what Photoshop sees and what our eyes see are two different things. Unless you've lost so much detail that you can actually see areas of color or brightness values missing in your image (known as banding or posterizing), you don't need to worry about how bad the histogram looks. All that matters is how the image looks. Here, after setting new black and white points and adjusting the midtones in the Levels dialox box (which you can now close out of by clicking the OK button to accept the changes you''ve made) is my final result: 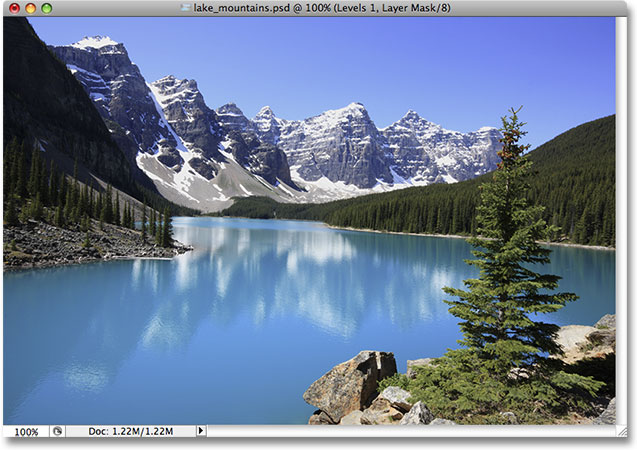 And there we have it! That's how easy it is to correct overall tonal problems in an image with Levels in Photoshop! Check out our Photo Retouching section for more Photoshop image editing tutorials!