So far in this series of tutorials on the many ways of converting color photos to black and white in Photoshop, we've looked at how to convert an image to the Grayscale color mode and how to remove the color by desaturating the image.

In this third tutorial in the series, we'll learn how Photoshop's Gradient Map adjustment allows us to easily "map" the original colors in an image to the colors in a gradient. You could play around for hours with a Gradient Map coming up with all kinds of wild and crazy color effects, but for our purposes here, we're going to look specifically at how a Gradient Map makes black and white conversions a snap! (Get it? "Map", "snap"? It rhymes! Yes, I know, just get on with it. Geez.)

Here's the image once again that I'm using throughout this series of tutorials:

The gradient preview bar shows us the black-to-white gradient that's being applied to the image.

Based on their brightness values, all of the original colors in the photo are now being replaced by the colors (or in this case, the shades of gray) in the gradient, and if we look at our photo in the document window, we see that the black-to-white gradient has converted the image to black and white: 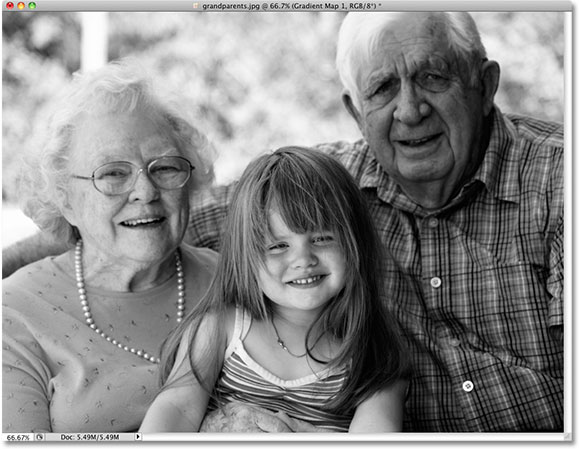 All of the original colors in the image have now been mapped to black, white, or some shade of gray in between.

It's not a bad start, but we can make some adjustments to our gradient to improve our black and white results. We'll look at how to do that next!

By simply mapping the original colors in the photo to our black-to-white gradient using the Gradient Map adjustment, we've managed to achieve decent results for our black and white conversion. But that was just a starting point. We can try to enhance the results even further by making a few simple changes to the gradient we're using.

Step 4: Adjust The Midtones With The Midpoint Marker

The color stops below the gradient preview bar on either end control the two main colors in the gradient.

If you click on either of the two color stops (doesn't matter which one), a small Midpoint marker will appear directly below the middle of the gradient:

Clicking on either color stop brings up a Midpoint marker below the middle of the gradient.

As you may have guessed from it's name, the Midpoint marker controls where the middle of the gradient falls between the two color stops on either side of it. By default, it's, well, in the middle, but it doesn't have to be. We can move the midpoint of the gradient simply by clicking on the marker and dragging it left or right. If you're familiar with how Photoshop's Levels adjustment works, you know that with a Levels adjustment, we can brighten or darken the midtones in an image (the brightness levels that fall between pure black and pure white) by dragging the midtone slider. We can do the same thing here with the gradient's Midpoint marker. By dragging the marker left or right, we can adjust the brightness of the midtones in our black and white image.

If you click on the Midpoint marker and look down at the Location option at the bottom of the Gradient Editor dialog box, you'll see that it's set to 50%. This means the gradient's midpoint is initially halfway between the color stops on either end of the gradient. I'm going to drag the Midpoint marker a short distance towards the left, which will move the gradient's midpoint closer to black. The Location value decreases as we move the slider closer to black. I'm going to stop when the Location value is set to around 43% since we usually don't have to drag the marker very far to see noticeable changes in the image (you'll need to release your mouse button after dragging the marker for the image in the document window to update with your changes):

The Midpoint marker acts like the midtone slider in the Levels adjustment, lightening or darkening the midtones.

Moving the midpoint of the gradient closer to black lightens the midtones, and my image now appears brighter: 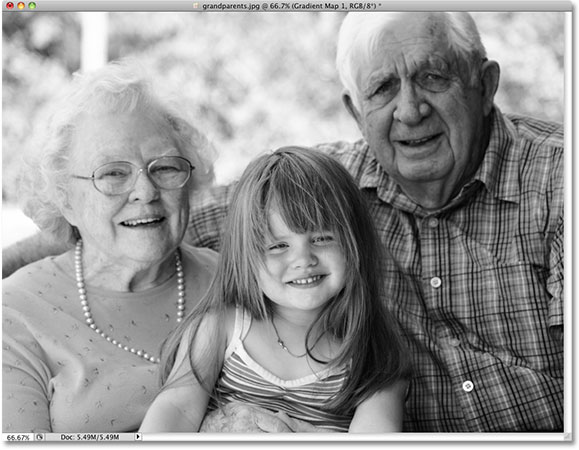 Moving the Midpoint marker just a short distance towards the left lightened the midtones considerably.

Likewise, we can drag the Midpoint marker towards the right, which will move the midpoint of the gradient closer to white. The Location value increases as we move the marker closer to white:

Don't drag the Midpoint marker too far, since small movements can show big changes to the midtones.

Moving the midpoint of the gradient closer to white darkens the midtones. In my case, the photo now appears too dark, but of course your image will be different, which is why you'll want to keep an eye on your photo in the document window as you drag the Midpoint marker to judge the results: 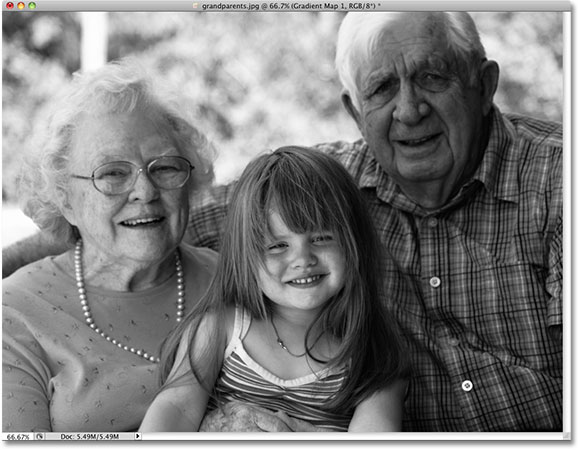 All photos are different, so watch your image as you drag the Midpoint marker to decide on the correct setting for your specific photo.

Step 5: Adjust Contrast With The Black And White Color Stops

We can also try to improve the overall contrast in the black and white image if necessary using the black and white color stops at either end of the gradient preview bar, although depending on your image, your black and white points may already be set to their optimal levels and no further adjustments should be made. You'll definitely want to keep Photoshop's Histogram palette open on your screen if you choose to adjust the contrast this way, since you'll want to make sure you don't clip any important shadow or highlight details in the image (see our How To Read An Image Histogram In Photoshop tutorial for more details). By default, the Histogram palette is nested in with the Navigator and Info palettes. If you can't see the Histogram palette on your screen, go up to the Window menu in the Menu Bar at the top of the screen and choose Histogram:

The Histogram shows us how the brightness values in the image are distributed between pure black and pure white.

To pull the darkest areas of your image closer to pure black, simply click on the black color stop below the left edge of the gradient preview bar and drag it towards the right. As you continue to drag the color stop towards the right, more and more of the image will be darkened:

Make the darkest areas in the image even darker by dragging the black color stop towards the right.

After dragging the black color stop towards the right, the darkest areas in my photo are now even darker: 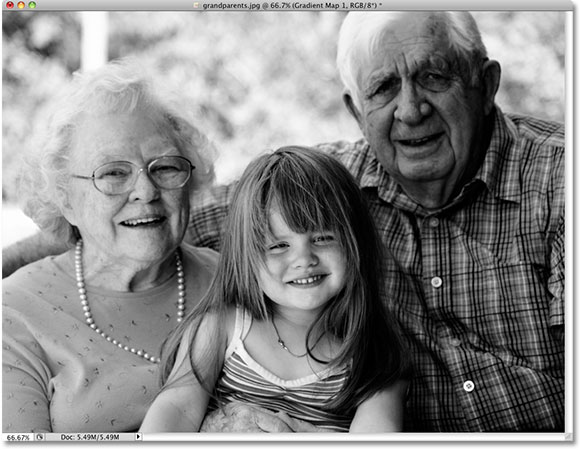 Depending on your image, darkening it with the black color stop can either improve or ruin the overall appearance.

However, if we look again at my Histogram palette, we now see a spike along the left edge of the histogram which means I've gone too far with the black color stop and pulled a lot of pixels in the image down to pure black, resulting in a loss of detail in the shadow areas:

A spike along the left edge of the histogram means you've lost detail in the shadow areas of the image.

Whether or not you have any room to move the black color stop without losing shadow detail will depend entirely on the image you're working on, which is why it's so important to keep an eye on the Histogram palette.

We can also push the lightest areas in the image closer to pure white by clicking on the white color stop below the right edge of the gradient preview bar and dragging it towards the left. As you continue to drag the color stop towards the left, more and more of the image will be lightened:

Make the lightest areas in the image even lighter by dragging the white color stop towards the left.

The lightest parts of my image are now even lighter after moving the white color stop: 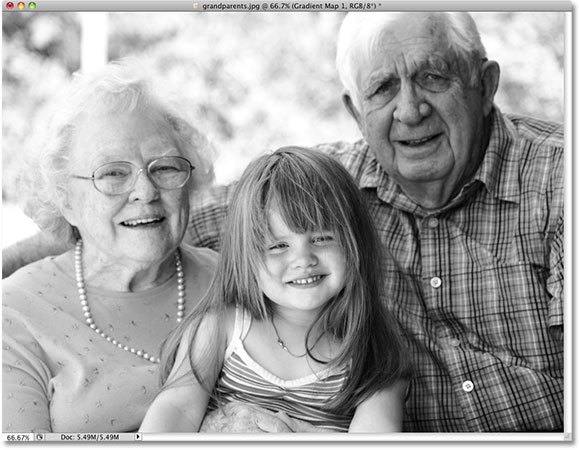 Just as with the black color stop, moving the white color stop can either improve or hurt the results depending on the image.

However, if we look once again at my histogram, we see a spike along the right edge, which means we've lost detail in the highlights by going too far with the white color stop and forcing too many pixels to pure white:

A spike along the right edge of the histogram means you've lost detail in the highlight areas of the image.

Again, whether or not you have any room to move the white color stop without blowing out the highlights will depend entirely on your image, since every photo is different. For a better way to improve the overall contrast of an image, which should usually be done before converting the photo to black and white, be sure to check out our Improving Image Tone With Levels tutorial.

Turn the Gradient Map adjustment layer on or off to show or hide the black and white effect.

Turning the adjustment layer off instantly restores all the color in the image:

The original full color image remains unharmed thanks to the flexibility of adjustment layers.

Click again on the layer visibility icon to turn the Gradient Map adjustment layer back on and return to the black and white version.

Up next, we'll look at how we can use Photoshop's Luminosity blend mode to create a black and white version of our photo by simply ignoring the color, and we'll see how we can improve upon the initial results with a couple of additional blend modes and a layer mask!