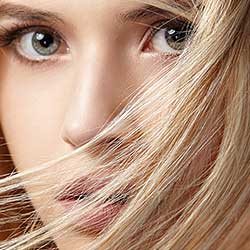 This tutorial shows you how to upscale and enlarge an image in Photoshop without losing quality and while keeping detail and textures looking great using Preserve Details 2.0.

When it comes to resizing images in Photoshop, the general rule has always been that you can make an image smaller than its original size, but you can't make it larger. Or at least, you can't make it larger if you care about image quality. To make an image smaller, all Photoshop really needs to do is take some of the pixels from the original image and toss them away. It sounds like a bad thing, but the result is just the opposite. The smaller version usually ends up looking sharper than the original.

But making an image larger than its original size is a whole other thing. Photoshop needs to add pixels to create detail that wasn't there before. And if that sounds like a bad thing, that's because it is. All Photoshop can do is guess at what the new pixels should look like, and then it tries to blend the new pixels in with the originals. The results haven't been great. Depending on which upsampling method you used, your larger version usually ended up looking soft and dull or chunky and oversharpened.

This is lesson 8 in my Resizing Images in Photoshop series.

Preserve Details 2.0 is available in Photoshop CC 2018 and later so any recent version will work including Photoshop 2023. You can get the latest Photoshop version here.

Open the image you want to enlarge. I'll use this image so we can see how good of a job Preserve Details 2.0 can do, not just on fine detail like eyes and hair but also on skin texture: 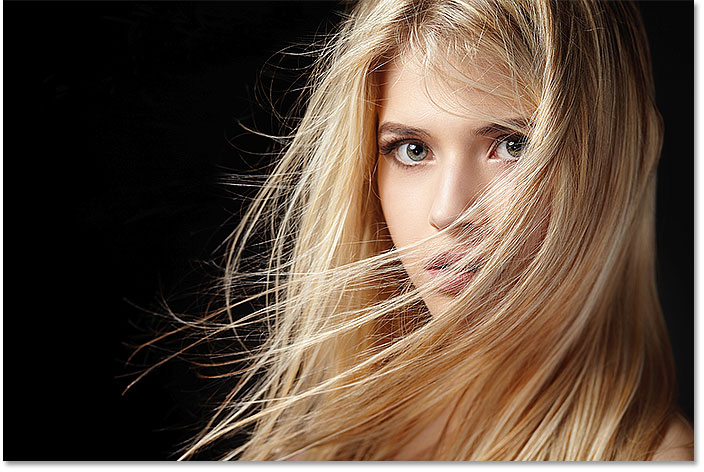 This opens the Preferences dialog box to the Technology Previews options. Make sure Enable Preserve Details 2.0 Upscale is selected, and then click OK to close the dialog box:

To see more of your image in the preview area, click and drag the bottom right corner of the Image Size dialog box outward to make it larger: 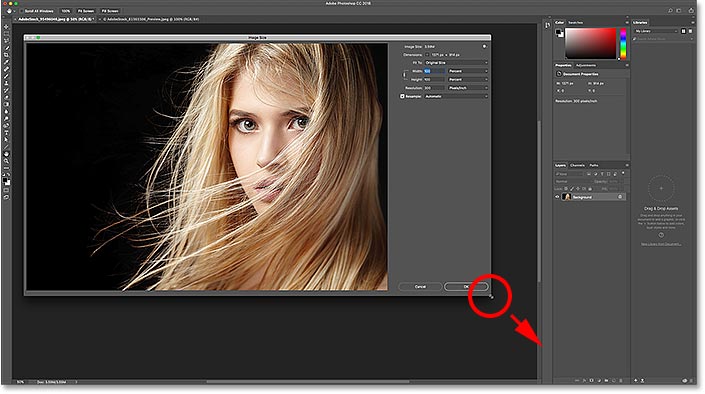 In the resizing options along the right, make sure Resample is selected. This tells Photoshop that we want to change the physical dimensions of the image. In other words, we want to add or remove pixels:

Step 5: Change The Width And Height 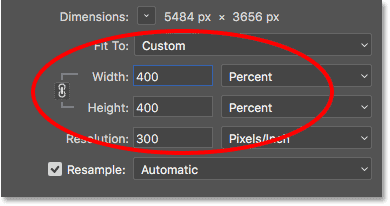 Increasing the width and height of the image by 400%.

By default, the resampling method (the algorithm Photoshop will use to add or remove pixels) is set to Automatic. This means that Photoshop will automatically choose the best algorithm for the job. At least, that's the idea:

The resample method set to "Automatic".

Click on the word "Automatic" to view a list of all the resampling algorithms we can choose from. The ones for upscaling the image are at the top. Select Preserve Details 2.0. If you're not seeing Preserve Details 2.0, you'll want to go back and make sure you've enabled it in the Preferences: 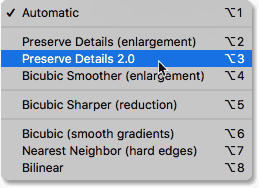 As soon as you select Preserve Details 2.0, the preview window on the left will update to show you what your upscaled image will look like using this new option. You can drag your image around inside the preview window to inspect different areas: 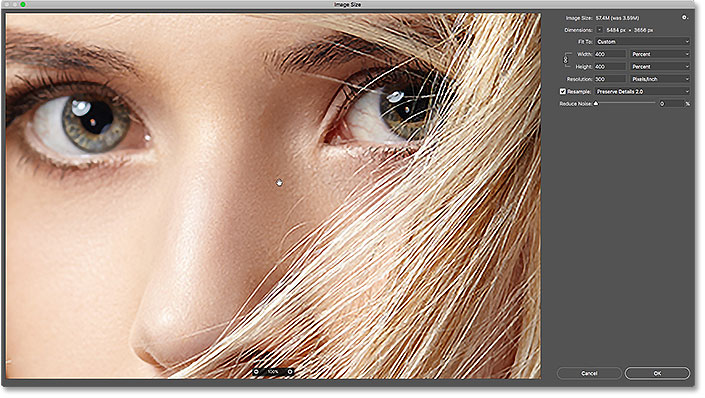 To get a better sense of how much of an improvement Preserve Details 2.0 really is over Photoshop's previous upscaling methods, let's do a quick comparison. First, position your image in the preview window so that you're viewing an area of fine detail. Then, click again on the resample method to re-open the list. Start by selecting Bicubic Smoother:

Bicubic Smoother was the best upscaling method we had back in Photoshop CS6 and earlier, and it does an okay job. But as it's name implies, Bicubic Smoother tries to clean up any problems by smoothing out the entire image. If we look at the woman's eye on the right, along with the strands of hair in front of it, we see that those areas now look a lot softer and less detailed than they did before: 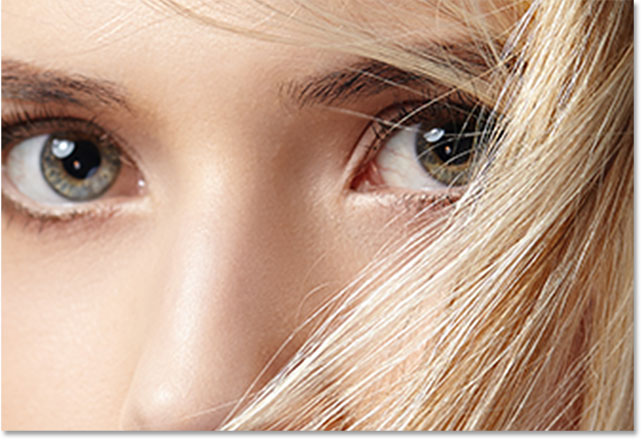 Preserve Details does a much better job of keeping important details in the image, as again we can see in the woman's eye and hair which now appear much sharper. But where Bicubic Smoother made things too soft, Preserve Details does the opposite. The image now looks oversharpened. Everything has a "chunky" look to it, especially the woman's skin texture, which is something you definitely don't want to oversharpen: 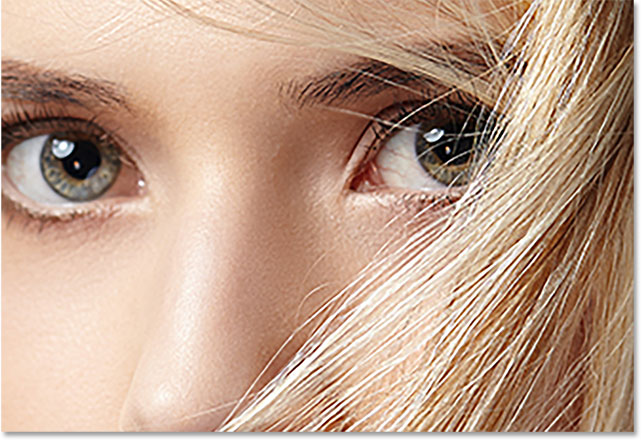 Preserve Details can make the upscaled image look too sharp.

Now that we've looked at Photoshop's previous upscaling options, let's compare them to the new Preserve Details 2.0 in Photoshop CC 2018. I'll reselect it from the list:

Preserve Details 2.0 uses advanced, "deep learning" artificial intelligence to detect and maintain important image details without oversharpening anything else. As soon as I select it, the preview in the Image Size dialog box instantly looks a whole lot better. Gone is the low-detail softness of Bicubic Smoother and the chunkiness from the original Preserve Details. Instead, notice how amazingly sharp her eye and hair now look, almost to the point where you might think the image was actually shot at this higher resolution. Meanwhile, Preserve Details 2.0 has largely avoided sharpening her skin texture. It remains nice and smooth, just as it should.

Keep in mind that we've upscaled the image by 400% which is beyond what you would typically do in a normal situation. Yet even at this extreme amount of upscaling, Preserve Details 2.0 gives us outstanding results: 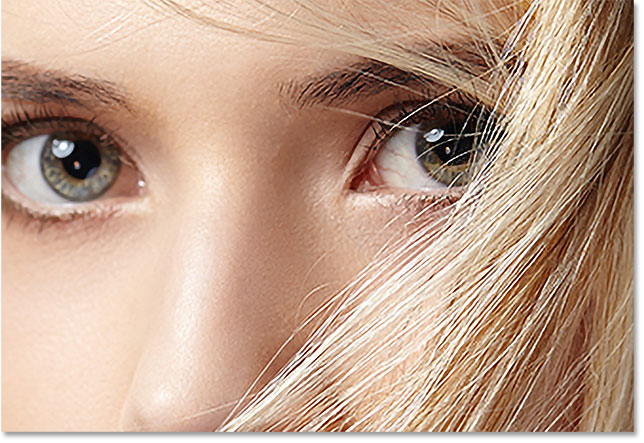 And there we have it! You can jump to any of the other lessons in this Resizing Images in Photoshop chapter. Or visit our Photoshop Basics section for more topics!