Adding Fireworks To A Photo With Photoshop

In this Photoshop Effects tutorial, we're going to learn how to add fireworks to a photo. What you'll need is a photo of fireworks and the photo you want to add the fireworks to (preferably a nighttime shot, since fireworks tend not to look very impressive in the middle of the afternoon).

Blending the two images together is easy. If you can paint with a brush and change a layer blend mode, you have all the Photoshop skills you need.

Here's the photo of fireworks I'll be using: 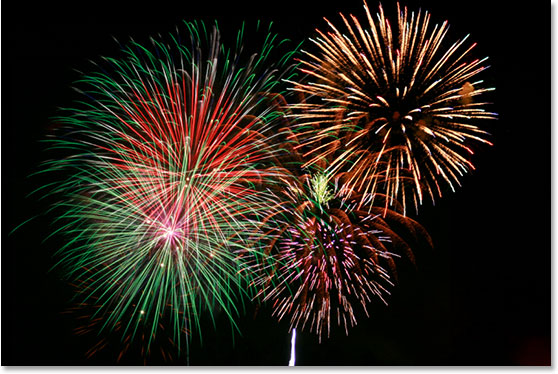 Here's the image I want to add the fireworks to: 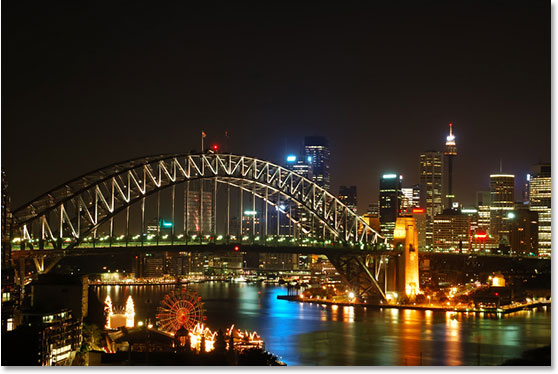 And here's what the final image will look like: 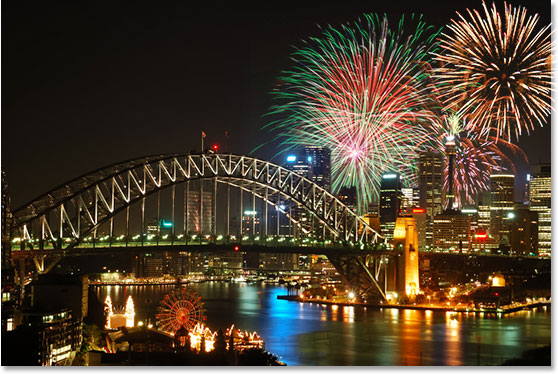 Step 1: Drag The Fireworks Photo Into The Other Photo

Select the Move tool from the Tools palette, or press "V" for the keyboard shortcut.

Then with the Move Tool selected, click inside the fireworks photo and drag it over into the other photo: 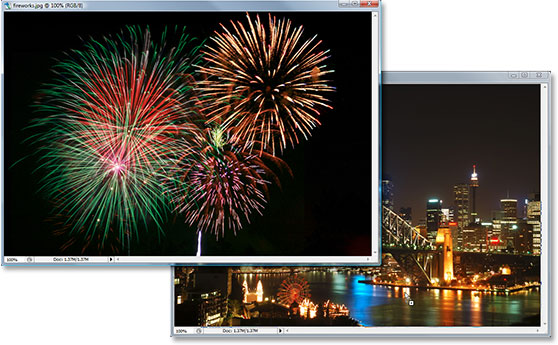 Click inside the fireworks photo and drag it into the other photo's document window with the Move Tool.

When you release the mouse button, the fireworks photo will appear above the second photo in the same document window, and if we look in the Layers palette, we can see that it's been placed on its own separate layer, with the fireworks photo on "Layer 1" at the top: 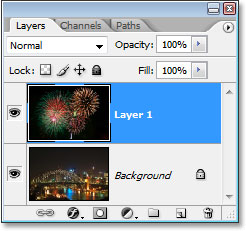 Photoshop's Layers palette showing both images now in the same document, each on its own separate layer. The fireworks photo is on "Layer 1".

You can close out of the document window containing the fireworks photo by itself at this point, since we no longer need it.

Step 2: Resize And Reposition The Fireworks With Free Transform

Now that we have the fireworks photo in the same document as the photo we want to add the fireworks to, we can move the fireworks where we want them and resize them if needed, and we can do both of these things at once with Photoshop's Free Transform command. With "Layer 1" selected in the Layers palette, use the keyboard shortcut Ctrl+T (Win) / Command+T (Mac) to bring up the Free Transform box and handles around the fireworks image. If you can't see the corner handles because part of your image is outside the viewable area, press Ctrl+0 (Win) / Command+0 (Mac) to fit everything on the screen. Then, to resize the image, hold down the Shift key, which will prevent you from accidentally distorting the width or height as you're resizing it, and then click and drag any of the four corner handles. To move the image around on the screen, simply click on the image and drag it with your mouse.

I'm going to reduce the size of my fireworks image and move it into the top right corner so the fireworks appear above the main part of the city: 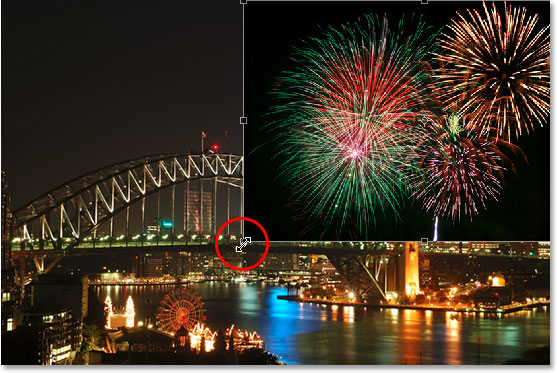 Move and resize the fireworks if needed with the Free Transform command.

Press Enter (Win) / Return (Mac) when you're done to accept the transformation.

Step 3: Change The Blend Mode Of The Fireworks Layer To "Screen"

Change the blend mode of the fireworks layer to "Screen" to blend them in with the photo below.

Here's my image after changing the blend mode: 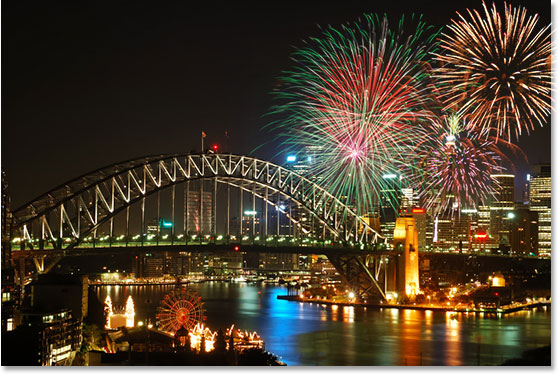 The image after changing the blend mode of the fireworks layer to "Screen".

With "Layer 1" still selected, click on the Add A Layer Mask icon at the bottom of the Layers palette: 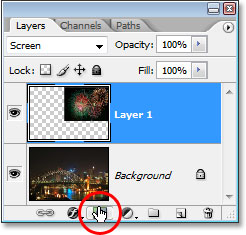 This adds a layer mask thumbnail to "Layer 1", and we can see that the layer mask, not the contents of the layer (the fireworks photo), is selected by the white highlight border around the thumbnail: 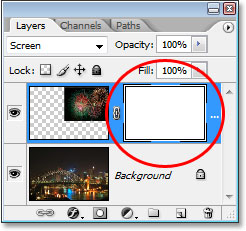 A layer mask is added to "Layer 1", with the layer mask thumbnail visible in the Layers palette.

Step 5: Lower The Opacity Of The Fireworks Layer 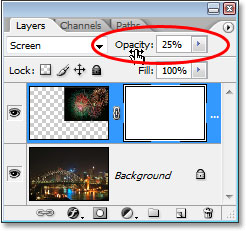 Lower the opacity of the fireworks layer so you can see the image behind it.

Step 6: Paint With Black To Hide The Fireworks As Needed

Then, grab your Brush Tool from the Tools palette or press B to access it with the keyboard shortcut:

Then, using a hard-edged brush and with black as your Foreground color, paint over any areas in the image where you want to hide the fireworks. You can zoom in on the image to make things easier by holding down Ctrl+Spacebar (Win) / Command+Spacebar (Mac) and dragging a selection around the area you want to zoom in on, then hold down the spacebar by itself to access the Hand Tool and drag the image around on the screen as needed: 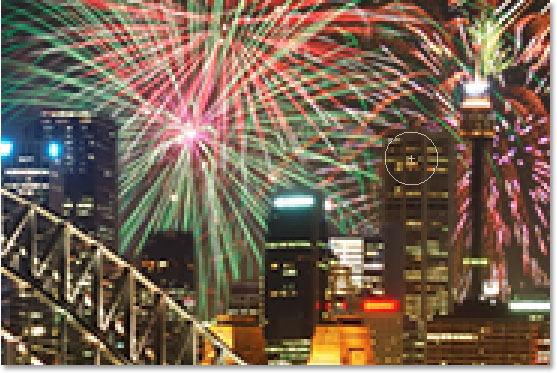 Paint with black over any areas where you need to hide the fireworks.

When you're done, if you've zoomed in on the image, press Ctrl+0 (Win) / Command+0 (Mac) to quickly zoom back out. Also, set the opacity of the fireworks layer back to 100%.

Here's my image after painting on the layer mask. The fireworks now appear to be behind the buildings: 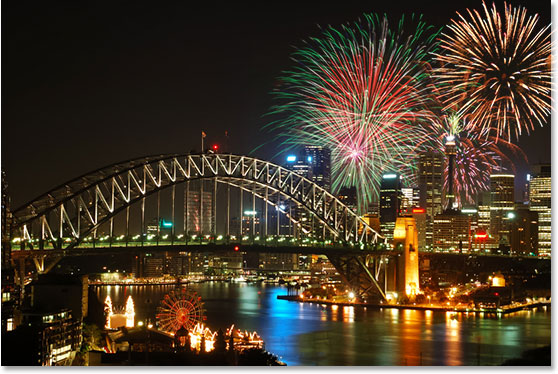 The fireworks now appear to be behind the buildings..

Step 7: Duplicate The Fireworks Layer To Brighten Them (Optional)

Finally, if you want your fireworks to be even brighter, with "Layer 1" still selected, press Ctrl+J (Win) / Command+J (Mac) to duplicate the layer: 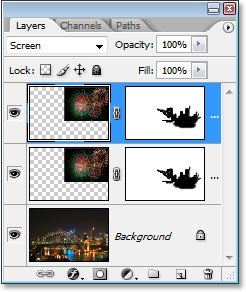 Press "Ctrl+J" (Win) / "Command+J" (Mac) to duplicate the fireworks layer and add more intensity to them.

If, after duplicating the layer, you find your fireworks are a little too intense, simply lower the opacity of the duplicated layer. I'm going to lower mine to about 50%: 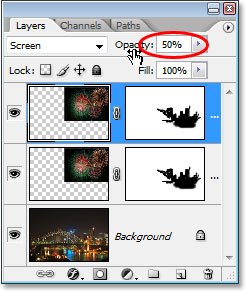 Lower the opacity of the duplicate layer to fine-tune the intensity of the fireworks.

Once you've fine-tuned the brightness of your fireworks, you're done! Here, after duplicating my fireworks layer and then lowering the opacity of the duplicate layer to 50%, is my final result:

And there we have it! That's how to add fireworks to an image with Photoshop! Visit our Photo Effects section for more Photoshop effects tutorials!