Reducing Noise In Images With Photoshop

In this Photo Retouch tutorial, we'll look at how to reduce the appearance of noise in an image, including luminance noise, color noise and even jpeg artifacts, all using the Reduce Noise filter, first introduced in Photoshop CS2 (which means you'll need at least CS2 to follow along).

Notice that the name of the filter is Reduce Noise, not Remove Noise. As powerful as Photoshop is, there's still no way to take a noisy image and clean it up completely, at least not without removing most of the detail in the image along with it.

Any time we shoot in low light, use high ISO settings, or leave the expensive dSLR at home because the compact camera is easier to carry, there's a good chance we'll be dealing with noise. Fortunately, while we can't remove it completely, Photoshop's Reduce Noise filter still does a good job of reducing noise without sacrificing important image detail. Let's see how it works.

Here's an image I have open on my screen, taken a couple of years ago while walking through Animal Kingdom in Disney World. I haven't done anything with the image yet other than cropped it a little: 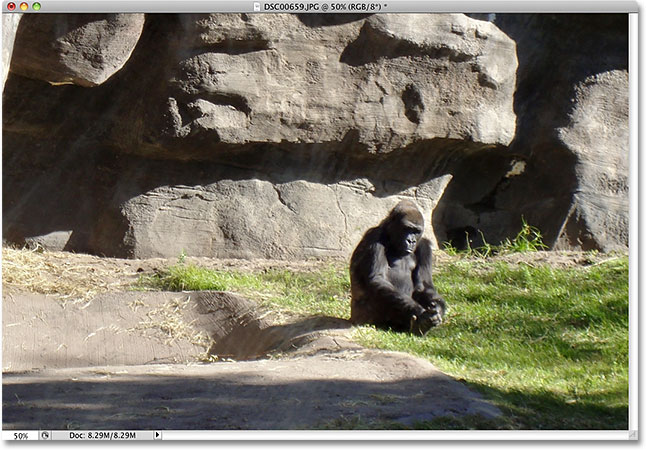 She may look bored, but you wouldn't like her when she's angry.

As I mentioned, there's three types of noise that the Reduce Noise filter can tackle. One of them is color noise, usually made up of red, green and blue dots. This image was taken with an inexpensive point-and-shoot camera, a prime candidate for noise, and if I zoom in on the gorilla, we see lots of red, green and blue "splotches" in her fur, especially along the edges between the dark shadow areas and the lighter areas: 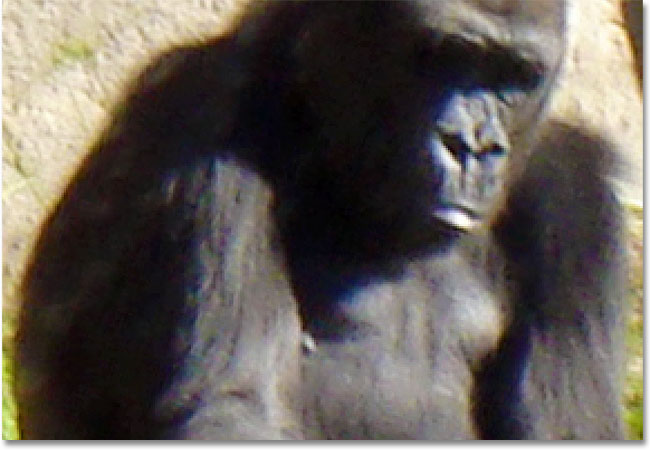 Red, green and blue color noise is visible when we zoom in.

The Reduce Noise dialog box contains a large preview area on the left so we can see what we're doing (although we can also see what we're doing in the document window itself as long as the Preview option is checked, which it is by default) and some sliders and options along the right. Even though it's not so obvious, the column along the right is actually divided up into different sections, with each section affecting a different type of noise. I've colorized the sections we're most interested in.

From top to bottom, the first two sliders, Strength and Preserve Details (colored in green), are used to remove luminance noise, which we'll look at shortly. Next is the Reduce Color Noise slider (yellow), which, as you may have guessed, reduces color noise. Below that is a slider we're not going to look at, Sharpen Details (not colored), since it has nothing to do with reducing noise. Sharpening images, which is what this slider does, is better handled with one of Photoshop's actual sharpening filters, like Unsharp Mask or Smart Sharpen, so I'd recommend lowering the Sharpen Details option down to 0%, effectively turning it off. Finally, we have the Remove JPEG Artifact option (blue) for reducing the appearance of jpeg compression artifacts: 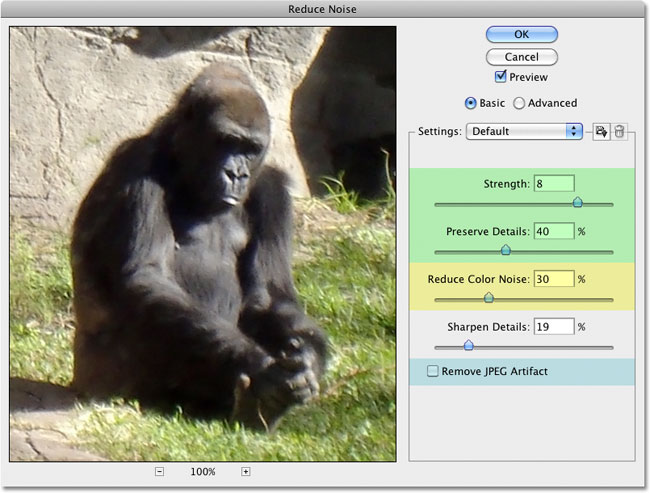 To get the most out of the Reduce Noise filter, it's best to begin by turning the filter off so it has no effect on the image. There's no actual "Off" button, but we can accomplish the same thing by dragging all of the sliders to the far left, which sets each option to 0. Also, make sure the Remove JPEG Artifact option is unchecked. 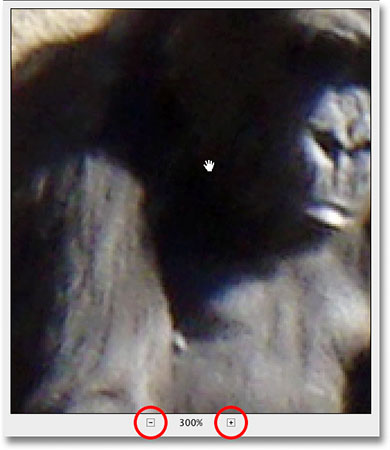 Use the + and - icons to zoom in and out of the image. Click and drag to move the image around inside the preview area.

The first type of noise you'll want to check for and reduce is color noise, those red, green and blue dots like the ones we're seeing in my image. Use the preview window in the dialog box to zoom in on an area that contains color noise. Start with the Reduce Color Noise option set to 0%, then slowly drag the slider towards the right until the color noise has blended in with the image as much as possible. Keep an eye on the preview area as you drag the slider to judge the results so you don't end up dragging too far:

Drag the Reduce Color Noise slider towards the right until the color noise disappears.

To quickly get a "before and after" view of the image so you can see how much of an improvement you've made, click and hold inside the preview area. This shows you what the original version looked like. Release your mouse button to see the effects of the Reduce Noise filter.

In my case, the color noise seems to disappear nicely with a Reduce Color Noise value of around 60%. We can see in the preview window that the red, green and blue dots have been removed. The value you end up using will depend entirely on your image, so it's important to watch the preview area as you drag the sliders: 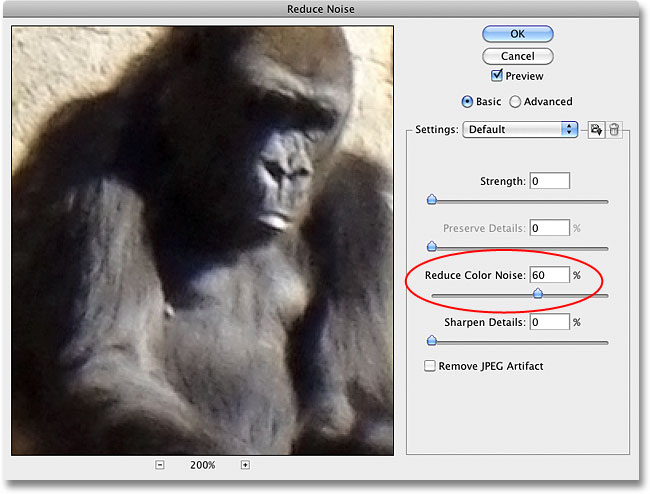 Dragging a single slider towards the right was all it took to remove the color noise from the image.

Once you've taken care of any color noise, it's time to reduce luminance noise. Unlike color noise which is made up of different colored dots, luminance noise contains dots of varying brightness levels (black, white, and gray). I'm going to switch to a different image, one where the luminance noise is easier to see. Normally, of course, you'd still be working on the same image. Here's a photo shot in a dimly-lit museum at ISO 2000 with my Canon 5D Mark II: 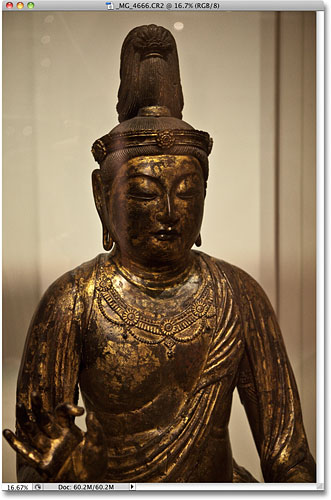 Noise in an image can be hard to see when you're zoomed out too far.

Even though the camera does an amazing job of keeping noise to a minimum at such high ISO settings, if I zoom in on the image inside the Reduce Noise dialog box, we still see quite a lot of luminance noise: 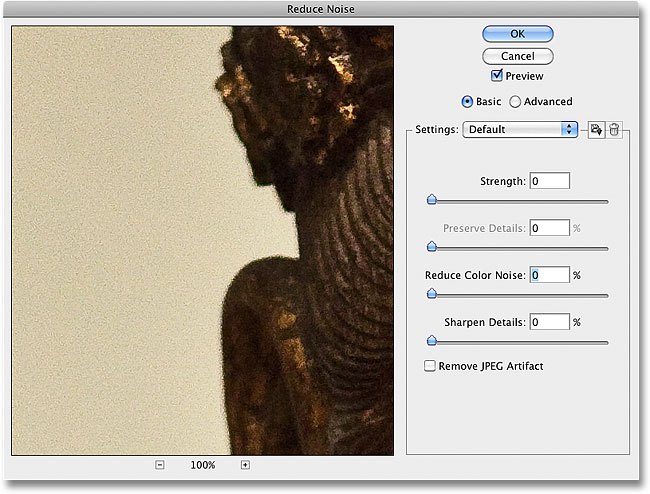 All those black, white and gray speckles are luminance noise.

Removing luminance noise is a simple two-step process, but remember, we need to have realistic expectations. In my case here, there's no way I'll be able to make an image shot at ISO 2000 look just as clean and smooth as if I had shot it at ISO 100 or 200. All we can do is try to make the image look better than it did originally.

First, start with the Strength value set to 0%, then slowly drag the slider towards the right while keeping an eye on the image in the preview area until as much of the luminance noise as possible is removed. Click and hold inside the preview area to see what the image looked like originally, then release your mouse button to see how much noise reduction has been applied. Once you've removed all the noise you can, begin dragging the Preserve Details slider towards the right to bring back as much image detail as possible without re-introducing the noise. It's a fine balancing act between removing noise and maintaining detail, and the values you end up using for Strength and Preserve Details will be different for every image: 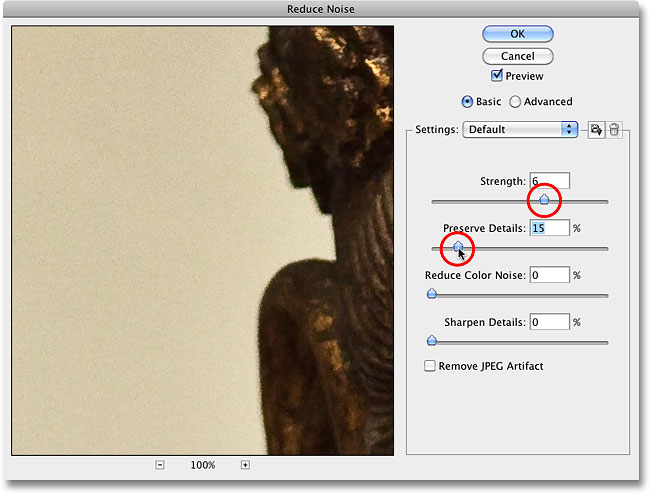 Remove as much noise as possible with the Strength slider, then bring back detail with Preserve Details.

If you can't seem to reduce the noise without losing lots of image detail, try the Advanced Options, which allow us to reduce noise on a channel-by-channel basis. First, set the Strength slider back to 0, then select Advanced in the top right of the dialog box. With Advanced selected, click on the Per Channel tab:

Select the Advanced option, then click on the Per Channel tab.

Most images are made up of three color channels - Red, Green and Blue - and it's very common for one of these channels to contain more noise than the others, with the Blue channel often being the biggest offender. By reducing noise on a channel-by-channel basis, we can apply the strongest amount of noise reduction to the channel that needs it the most, leaving more image detail in the cleaner channels.

Cycle through the channels using the Channel option directly below the smaller, black and white preview area. Click and drag inside the preview area to move the image around as you inspect the channel for noise. Below the Channel option are the same Strength and Preserve Details sliders we saw earlier, but this time, they affect only the selected channel. Just as we did a moment ago, start with both sliders set to 0, then begin dragging the Strength slider towards the right to remove as much noise as possible in the channel. Click and hold inside the black and white preview area to view how the channel looked originally, then release your mouse button to view it with the noise reduction applied. Once you've removed as much noise as possible, begin dragging the Preserve Details slider towards the right to bring back some image detail without bringing back too much noise. Here, I'm reducing noise in the Blue channel, which in my case is the noisiest channel of the three:

Switch between the three color channels, then apply different amounts of noise reduction to each channel.

Once you've done all you can in each channel, switch back over to the main controls by clicking the Overall tab to the left of the Per Channel tab, then try again with the main Strength and Preserve Details sliders to see if you can fine-tune the results even more: 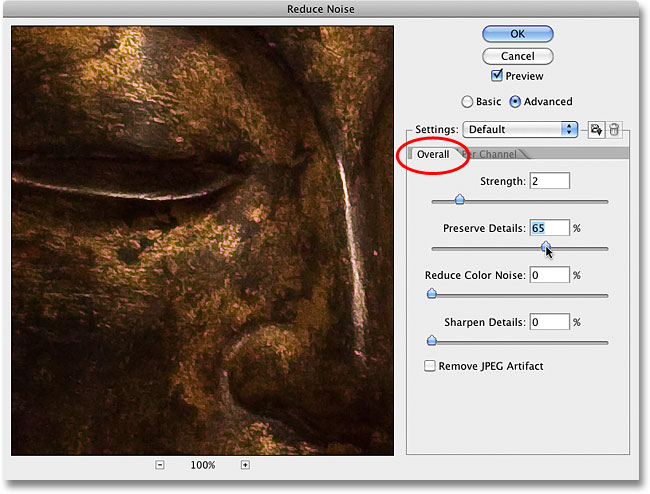 When you're done with the individual channels, fine-tune things with the Overall sliders.

Finally, whenever you're working with jpeg images, whether you're shooting jpegs with your digital camera or the image was saved as a jpeg in Photoshop or some other program, you'll encounter jpeg compression artifacts, which make the image look like it's been divided into a pattern of 8x8 pixel squares. Just how visible these artifacts will appear depends on how much compression was used, as well as how many times the image was saved as a jpeg. Each time you re-save a jpeg image as a jpeg image, the quality becomes worse.

To reduce the appearance of the compression artifacts, select the Remove JPEG Artifact option: 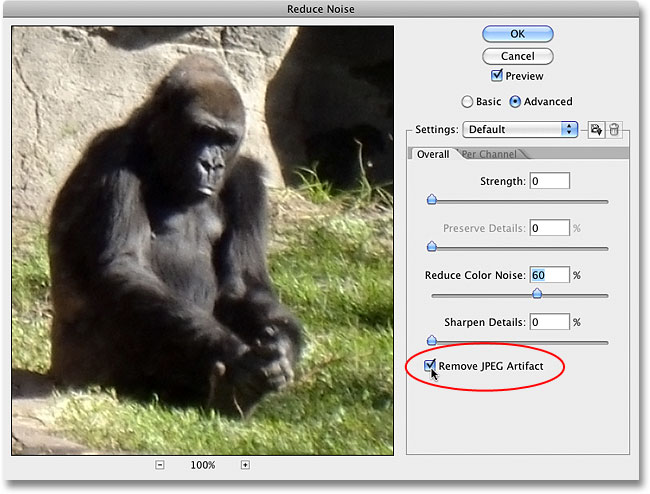 Select the Remove JPEG Artifact option to reduce the appearance of jpeg compression.

Make sure you inspect the image when this option is selected, since it could result in a loss of too much detail. As with luminance and color noise, it's always a trade-off between reducing noise and keeping as much image detail as possible. When you're done, click OK in the top right corner of the dialog box to apply all of the settings and exit out of the Reduce Noise filter.

And there we have it! Check out our Photo Retouching section for more Photoshop image editing tutorials!