In the first in this series of tutorials on the many ways of converting color photos to black and white in Photoshop, we learned how we can quickly remove the color information in an image by converting it to the Grayscale color mode.

In this second tutorial, we'll look at another fast and easy way to remove the color, this time by desaturating the image. There's a couple of ways to go about it, so we'll look at the most basic way first, then we'll see how the second way gives us a little more flexibility and creative freedom with the final result.

Here once again is the image I'll be using throughout these tutorials so we have an easy way of comparing the results of our various black and white conversion techniques:

The quickest way to desaturate the color in a photo is with Photoshop's Desaturate command, which you'll find by going up to the Image menu at the top of the screen, choosing Adjustments, and then choosing Desaturate:

For an even faster way to select the Desaturate command, simply press the keyboard shortcut Shift+Ctrl+U (Win) / Shift+Command+U (Mac). No matter which way you choose, Photoshop instantly desaturates all the color in the photo, leaving us with a basic black and white version: 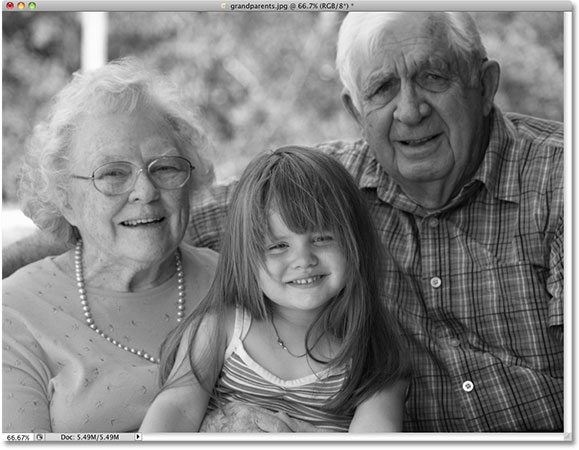 The photo now appears in black and white after desaturating the color.

Using the Desaturate command was certainly quick and painless, but the problem is, it's also permanent. If we look in our Layers palette, we can see that our photo is sitting on the Background layer, and in the layer preview thumbnail to the left of the layer's name, we see that sure enough, our image is now in black and white:

The preview thumbnail shows us a small preview of the contents of a layer.

Since we've made changes directly to the original image, if we save our document and close out of it at this point, the color in the photo will be gone for good. Even if we save the document as a Photoshop .PSD file, there will be no way to bring the original color back. Of course, one way we could have avoided this problem would have been by first duplicating the Background layer to create a copy of the image, then applying the Desaturate command to the copy. But there's an even better way, one that gives us a little more creative freedom with the final result and, as we learned in our Reducing File Sizes With Adjustment Layers tutorial, will help keep the size of our Photoshop document to a minimum, and that's by using a Hue/Saturation adjustment layer!

First, before we go any further, let's bring back the photo's original color by undoing the Desaturate command, which we can do by going up to the Edit menu at the top of the screen and choosing Undo Desaturate. Or, a faster way to undo your last step is by pressing the keyboard shortcut Ctrl+Z (Win) / Command+Z (Mac) (to undo multiple steps, press Ctrl+Alt+Z (Win) / Command+Option+Z (Mac)):

Go to Edit > Undo Desaturate, or press Ctrl+Z (Win) / Command+Z (Mac) to restore the color in the photo.

To desaturate the color, simply drag the Saturation slider all the way to the left:

Drag the Saturation slider all the way to the left to completely remove the color from the image.

This gives us the exact same result that we saw with the Desaturate command. With the color removed, we're left with a basic black and white version: 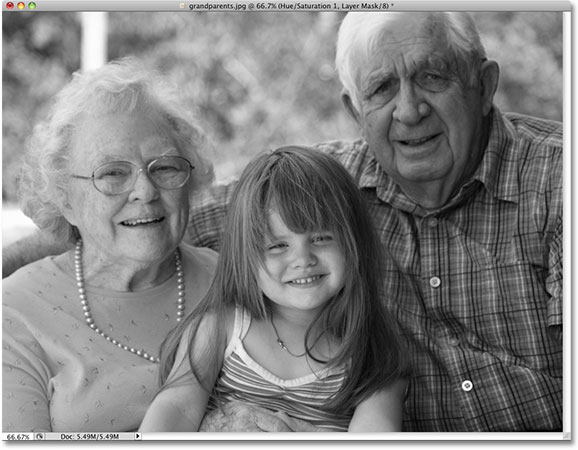 Once again, the color has been removed to give us a black and white version of the photo.

So what's the difference between using the Desaturate command and dragging the Saturation slider? Well, let's say we decide that we don't want a completely black and white image. We'd like to bring back a subtle amount of the photo's original color. With the Desaturate command, unless we duplicated the Background layer first and applied the command to a copy of the image, we'd be out of luck. But with the Hue/Saturation adjustment layer, bringing back some of the color is easy!

Since we're using an adjustment layer, nothing we're doing to our image is permanent. We're free to make as many changes as we like without causing any harm to the original photo (see our Non-Destructive Photo Editing With Adjustment Layers tutorial to learn more). To restore some of the original color, simply drag the Saturation slider back a little towards the right. Keep an eye on your photo in the document window to judge the results as you drag the slider. The further you drag it towards the right, the more color you'll restore. Since we want to bring back just a hint of color, I'm going to drag my Saturation slider a short ways toward the right until the value displayed in the Saturation input box is around -90, which brings back 10% of the original color saturation:

The Saturation slider makes it easy to control how much color is removed from the image.

Rather than a completely black and white image, my photo now has more of a muted color effect: 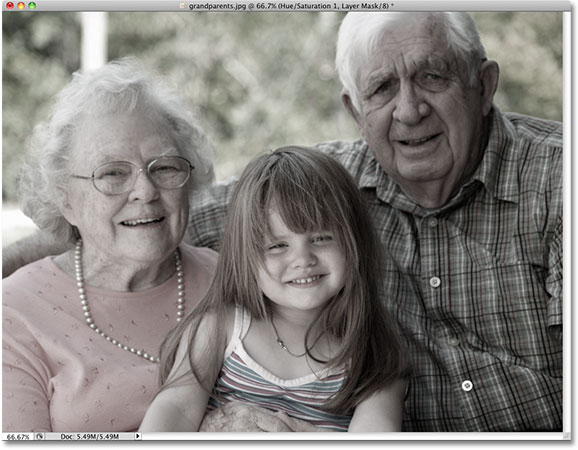 Leaving a hint of color can sometimes be more interesting than a completely black and white effect.

If you're using Photoshop CS3 or earlier, click OK in the top right corner of the Hue/Saturation dialog box when you're done to exit out of it.

Since our black and white effect is entirely contained within the Hue/Saturation adjustment layer, if at any point we want to restore the original full color image, all we need to do is turn off the adjustment layer by clicking on its layer visibility icon (the "eyeball" icon), which you'll find on the far left of the layer in the Layers palette:

Turn the black and white effect on and off by clicking on the layer visibility icon.

The original color is instantly restored:

With the adjustment layer turned off, the document window once again displays the original full color image.

Click again on the layer visibility icon to turn the adjustment layer back on and switch back to the black and white version.

Up next, we'll look at another fast, fun and interesting way to convert a color photo to black and white in Photoshop, this time using a Gradient Map!