Difference Between Image Resizing and Resampling in Photoshop

When changing the size of an image in Photoshop, there's really two ways to go about it. You can either resize the image, or you can resample it. A lot of people use the terms resizing and resampling as if they mean the same thing, but they don't. There's an important difference between the two.

As we'll see in this tutorial, the difference, as important as it is, is controlled by nothing more than a single checkbox option at the bottom of the Image Size dialog box.

Again, just to make sure we're on the same page so far:

See? You already know enough so that the next time someone refers to changing the number of pixels in the image as resizing the image, you can look them proudly in the eyes and say, "I think what you really meant to say there, Bob, is that you're going to be resampling the image, not resizing it." Assuming, of course, that the person's name is Bob. And assuming you don't want Bob to like you much anymore because you think you know it all.

Let's look more closely at the difference between resizing and resampling.

Resizing vs Resizing An Image

First, we need a photo. This one will work nicely: 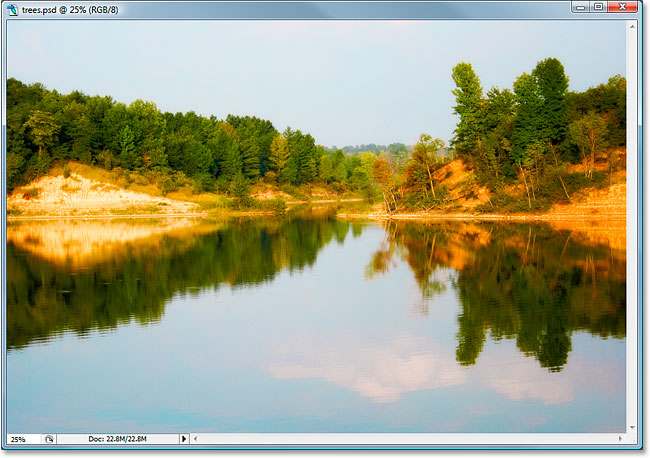 Let’s look at what the Image Size dialog box is telling us about this image. To access it, I’ll go up to the Image menu at the top of the screen and choose Image Size:

Let's take a look at the Pixel Dimensions part of the Image Size dialog box to see exactly how large our image is, in pixels.

We can see here that the photo is quite large, with a width of 3456 pixels and a height of 2304 pixels. That's a combined total of nearly 8 million pixels (the camera used was an 8MP camera, hence the 8 million pixels in the photo), which gives us lots of image information to work with in Photoshop.

Before we go any further, there's three more options in the Image Size dialog box below the Document Size section:

The first one, Scale Styles, has to do with Layer Styles and how they're affected by resizing or resampling the image. We'll ignore that option since it has nothing to do with this topic. The second option, Constrain Proportions, which is enabled by default, links the width and height of the image together so that if you make a change to the width of the image, for example, Photoshop will automatically change the height, and vice versa, so that the proportions of the image remain the same and don't get distorted. This is normally what you want, but if for some reason you want to be able to change the width and height independently of each other, simply uncheck the Constrain Proportions checkbox.

Finally, we come to one of the most important options in the Image Size dialog box, Resample Image. Remember at the beginning of this tutorial when I said that the difference between resizing and resampling an image is controlled by nothing more than a single checkbox option? This is it! This is the option that determines whether we're resizing our image or resampling it. Again, resizing keeps the pixel dimensions (the number of pixels in the image) the same and simply changes the size at which the image will print, while resampling physically changes the number of pixels in the image. By default, the Resample Image option is checked, which means that the Image Size dialog box is now essentially the Image Resample dialog box, even though it still just says "Image Size" at the top.

First, with the "Resample Image" option checked, as it is by default:

And here it is with "Resample Image" unchecked:

Can you spot the difference? With "Resample Image" unchecked, if you look up at the Pixel Dimensions section of the dialog box, you'll see that while Photoshop is still telling us how many pixels are in the image for the width and height, we're no longer able to change those numbers. They're listed for information only, and all we can do at this point is change how large our image will print using the Document Size section. With "Resample Image" checked though, the pixel dimensions are shown inside white input boxes which we can click inside of and type in new values, effectively changing how many pixels are in our image.

Also notice that the Scale Styles and Constrain Proportions options at the bottom of the Image Size dialog box are grayed out when Resample Image is not checked:

Constrain Proportions is grayed out when Resample Image is unchecked because we can no longer physically change the number of pixels in the image, therefore the proportions of the image are fixed. If the image is 20 pixels wide and 10 pixels tall, then no matter how large or small we print it, the width will always be twice the size of the height. If you change the width value in the Document Size section, both the height and the resolution values will also change. Change the height value and the width and resolution values will change. Change the resolution value, and you guessed it, the width and height values will change. All we can do now is change how large or small the image will print, either by entering new values for the document size or by changing the resolution. Again, just as with the Scale Styles option, the Constrain Proportions option is of no concern to us or to Photoshop when all we're doing is resizing the print size of the image.

Finally, there's one more option that's grayed out with Resample Image unchecked, and that's the drop-down box to the right of the Resample Image option:

This drop down box is where you can select from Photoshop's "interpolation algorithms". That's a fancy phrase for what essentially means how Photoshop handles throwing away pixels when you resample the image to a smaller size, and how it handles adding pixels when you resample the image to a larger size. As of Photoshop CS2, there's three main options to choose from - Bicubic, Bicubic Sharper and Bicubic Smoother, and knowing when to use which option can make a big difference with image quality. We'll look at the differences between them in detail in another tutorial, but for now, here's the general rule:

Again, these options are grayed out here because they only apply to images that are being resampled. If all you're doing is changing how large or small the image will print on paper, these options don't apply.

And there we have it!